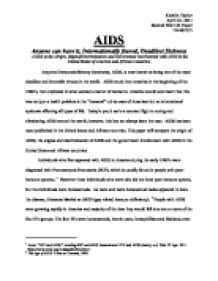 A look at the Origin, Stigma/Discrimination and Government Involvement with AIDS in the United States of America and African Countries

AIDS Anyone can have it, Internationally feared, Deadliest Sickness A look at the Origin, Stigma/Discrimination and Government Involvement with AIDS in the United States of America and African Countries Acquired Immunodeficiency Syndrome, AIDS, is now known as being one of the most deadliest and incurable viruses in the world. AIDS snuck into America in the beginning of the 1980's, then exploded in what seemed a matter of moments. America would soon learn that this was not just a health problem in the "immoral" cul-de-sacs of American but an international epidemic affecting all types of life. Today's youth see's a constant fight in curing and eliminating AIDS around the world; however, this has not always been the case. AIDS has been most publicized in the United States and African countries. This paper will compare the origin of AIDS, the stigma and discrimination of AIDS and the government involvement with AIDS in the United States and African countries. Individuals who first appeared with AIDS in America during the early 1980's were diagnosed with Pneumocystis Pneumonia (PCP), which is usually found in people with poor immune systems. 1 However these individuals who were sick did not have poor immune system, but the individuals were homosexuals. As more and more homosexual males appeared to have the disease, it became labeled as GRID (gay related immune deficiency). 2 People with AIDS were growing rapidly in America and majority of the time they would fall into one or more of the four H's groups. The four H's were homosexuals, heroin users, hemophiliacs and Haitians; even though there were numerous cases were people did not fall into one of these categories.3 Soon individuals from the Center of Disease Control (CDC) ...read more.

Uganda has recently proposed a new anti-gay bill that will include the following conditions: life in prison for gay sex, execution for people having HIV and homosexuals having sex, prison for anyone knowing about homosexual activity and the prevention of homosexuality promotion16. These incidents are just a few of the many extreme measures that African countries have taken against homosexuality. One of the reasons behind these horrifying laws against homosexuals is to put a stop to the spread of the AIDS virus. "Sub-Saharan Africa is more severely affected by HIV/AIDS than any other part of the world, with the United Nations reporting between 25 and 28.2 million people infected in 2003-between 50 and 75 percent of the worldwide total17. Malawi claims that by that an "inclusion of gay men will help in the fight against AIDS"18. Kenya is trying to form a census of all the people who are gay in the country, so they can provide condoms and safe sex information. 19 However, as stated early, homosexuals can be thrown in jail for up to 14 years in Kenya. African leaders do not approve of this lifestyle, so they are place the blame of the number one killer in African countries on homosexuals. The AIDS/HIV health issue is effecting African countries the most, but these countries leaders are going about the wrong way to hinder this disease from spreading. Individuals with AIDS in African countries face discrimination in their personal life and also their professional life, the stigma against homosexuals has justified horrible laws that threaten the life of innocent and uninfected homosexuals. ...read more.

This essay covers the main points well, and makes a number of good arguments. It could be improved by taking a more analytical approach to why the US and Africa differed in their approach, and what effects this had in the progress of the epidemic.