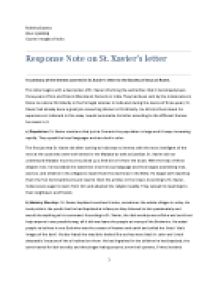 A summary of the themes covered in St. Xaviers letter to the Society of Jesus at Rome about his mission in India.

﻿Ridhima Saxena FSLE 3 (60918) Course: Images of India ________________ Response Note on St. Xavier?s letter ________________ A summary of the themes covered in St. Xavier?s letter to the Society of Jesus at Rome. This letter begins with a description of St. Xavier informing the authorities that it had already been three years of him and Francis Mancias at Comorin in India. They had been sent by the missionaries in Rome to restore Christianity in the Portugal colonies in India and during the course of three years, St. Xavier had already done a great job converting Hindus to Christianity. He informs them about his experience in India and in this essay I would summarize his letter according to the different themes he covers in it. a) Population: St. Xavier mentions that just at Comorin the population is large and it keeps increasing rapidly. They speak the local languages and are dark in color. The first job that St. Xavier did after coming to India was to interact with the most intelligent of the men at the coast who were well versed in the Malabar as well as Castilian. St. Xavier did not understand Malabar much but he picked up a little bit of it from the locals. With the help of these diligent men, he translated the Catechism into the local language and then began assembling men, women, and children in the villages to teach them the doctrines in the Bible. ...read more.

d) On Brahmins: St. Xavier?s detests the Brahmins to the core and considers them a class of people who are ?perverse?, ?wicked?, ?liars and cheats?. They believed and performed the superstitious customs of the Hindu religion, and took care of the idols. St. Xavier averred that they were the craftiest people in the whole world and the only real job they performed was to deceive the ignorant and simple masses by asking them to make offerings of the things in the temple that they wished to have. They had instilled such a fear of God in the people that they would listen to the Brahmins blindly and in the name of God, supply food, wine, clothes, etc for the Brahmins? wives and children. The Brahmins were eager to get St. Xavier on their side and for that matter, they used to try to bribe him with gifts and presents that he would return to them all the time. They were largely illiterate but knew all the tricks to fool the masses and control them. He also mentions his meeting with the Brahmins in a pagoda where he tried to teach them about God and Christianity and nearly convinced them that it was the only true religion that existed. Yet he was able to convert just one Brahmin to Christianity and took great pride in that. Trends observed in St. ...read more.

Although, he accomplishes his mission with great love and kindness, his treatment towards the crowd is more like a savior who is trying to indoctrinate Christianity to save ?a multitude of souls? from a ?blind heathen? and damnation in the hell. Overall, I found his manner of his writing quite manipulative as he carries out the task of converting Hindus hiding cleverly under the pristine mask of love and kindness. Along with his teachings about God, he propagates his hatred for idol worship (Hinduism) to the people. Yet, somewhere I find him convincing because Hinduism with its caste system and customs governed only by the Brahmins at one point did become very oppressing for the masses. It might have been the case that Brahmins took undue advantages of their power by chanting mantras only a few understood (because the common language was not Sanskrit) and looted money from the petty, illiterate people with lengthy and overbearing pujas and customs. St. Xavier was wise enough to tap the ailing nerve of the people by openly loathing these customs and the idol worship and providing them with a better alternative of Christianity. [1] ________________ [1] All the words and phrases in italics are picked from the primary text itself. No secondary sources have been referred to for this paper and the critique on the writing style and trends observed is entirely based on my opinions on the text. ...read more.