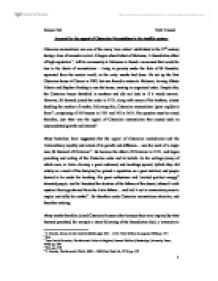 Account for the appeal of Cistercian Monasticism in the twelfth century

Eleanor Fell Nick Vincent Account for the appeal of Cistercian Monasticism in the twelfth century Cistercian monasticism was one of the many 'new orders' established in the 12th century during a time of monastic revival. It began when Robert of Molesme, 'a Benedictine abbot of high reputation'1, left his community at Molesme to found a movement that would be true to his ideals of monasticism - living in poverty under the Rule of St Benedict, separated from the secular world, as the early monks had done. He set up the first Cistercian house at Citeaux in 1097, but was forced to return to Molesme, leaving Abbots Alberic and Stephen Harding to run the house, creating an organised order. Despite this, the Cistercian house dwindled in numbers and did not look as if it would survive. However, St Bernard joined the order in 1113, along with many of his brothers, almost doubling the number of monks. Following this, Cistercian monasticism 'grew rapidly to fame'2, comprising of 353 houses in 1151 and 742 in 1675. The question must be raised therefore, just what was the appeal of Cistercian monasticism that caused such an unprecedented growth and interest? Many historians have suggested that the appeal of Cistercian monasticism and the 'extraordinary rapidity and extent of its growth and diffusion... ...read more.

There have been recent suggestions however, that observing the Rule of St Benedict was not initially specified under Cistercian order when the Exordium Cisterciensis Cenobii was written. Therefore it may not have had a great significance to the appeal of the movement at the time. Turk believes, that the observance of Benedict's Rule was added to the Exordium Cisterciensis Cenobii at a later date, in order that the houses under Cluny could not criticise the Cistercians.19 However, there was certainly still a reversion to original monasticism, and this made the Cistercian order very attractive to monks in the 12th century who had become discontented with the 'old orders'. This in theory offered them a way of life that the 'old orders' no longer could provide. It was also believed in the 12th century, that the more fervent the order the more worthy it was, and this made Cistercian monasticism appealing as it was indeed fervent; the monks 'venerated poverty', had no personal property and a quote from The Life of Ailred demonstrates this: 'I am tormented and crushed by the length of the vigils... the food cleaves to my mouth... the rough clothing cuts through my skin and flesh down to my very bones'20. ...read more.

These men, such as St Ailred of Rievaulx were very influential, as they 'spoke passionately' and with 'burning conviction'29 about their lives in the monasteries and the Cistercian order. This accounts further for the appeal of Cistercian monasticism, as others became interested in the order as a result of enthusiastic preaching. Overall, it can be seen that many factors contributed to the appeal of the Cistercians, not just the influence of St Bernard as some historians had previously suggested. Bernard was certainly a huge contributing factor to the order's appeal, due to his passionate preaching and writing, but the organisation of the movement was pioneering. This measure that allowed the Cistercians in theory to maintain their monastic ideals must have been very attractive to those who wanted to adopt an austere life. The combined issues of lay brotherhood, equality and reverting to original monasticism contribute to its interest. The success of Cistercian monasticism itself however, accounts for the appeal to some extent: people witnessed others joining, and realised its popularity, therefore joining themselves. David Knowles summarises the appeal of Cistercian monasticism well, saying: 'the Cistercians offered a clear, uniform and comprehensive rule of life, a system of government of unrivalled excellence, and of the presence in their midst of a man who was the greatest spiritual force of his century'30. ...read more.