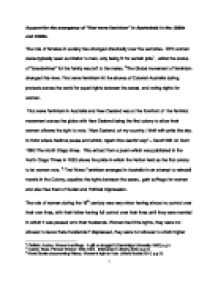 Account for the emergence of first wave feminism in Australasia in the 1880s and 1890s.

Account for the emergence of "first wave feminism" in Australasia in the 1880s and 1890s. The role of females in society has changed drastically over the centuries. With women stereotypically seen as inferior to men, only being fit for certain jobs1 , whilst the status of "breadwinner" for the family was left to the males. 2The Global movement of feminism changed this view. First wave feminism hit the shores of Colonial Australia during protests across the world for equal rights between the sexes and voting rights for women. First wave feminism in Australia and New Zealand was at the forefront of the feminist movement across the globe with New Zealand being the first colony to allow their women citizens the right to vote. "New Zealand, oh my country, I thrill with pride the day, to think where Nations pause and shrink, Again thou lead'st way" - David Will. M. Burn 1893 The North Otago times. This extract from a poem which was published in the North Otago Times in 1893 shows the pride in which the Nation held as the first colony to let women vote. 3 First Wave Feminism emerged in Australia in an attempt to reinstall morals in the Colony, equalize the rights between the sexes , gain suffrage for women and also free them of Social and Political Oppression. ...read more.

William Lane wrote about the poor conditions of women in the workplace in Australia during the late 1880's " The position of women in the cities of the Colony s becoming worse and worse every year. They are becoming herded in stifling workshops and ill-ventilated attics" In 1882, after the drastic rise of teen pregnancy, many of whom were unable to support themselves let alone their child, and the large number of young women found working in Brothels across South Australia, a group of men and women in formed the Suffrage League of South Australia and protested to the Parliament to raise the age of consent for girls to have sexual intercourse from thirteen to sixteen, in an attempt to lower these numbers. The parliament of South Australia agreed to having the age of legal consent from thirteen to sixteen. Once winning the right to raise the age of consent the Suffrage movement of South Australia protested against other laws which were discriminatory against women. Like many other colonies in Australia, the Suffrage movement of South Australia aimed to franchise women as they realized that without the right to vote, there would be little change and improvement. 10 During 1884 there was an influx of crime against women ranging from domestic violence to random attacks on streets, in Melbourne. ...read more.

By the late nineteenth century and the early twentieth century all the colonies of Australia granted their women the right to vote and also made them citizens. South Australia led the colonies allowing their women who were citizens to vote 1894, followed by Western Australia in 1899, New South Wales 1902, Tasmania 1903, Queensland 1905 and finally Victoria in 1908, Aboriginal women however were still excluded from this vote. 16 In conclusion the main reason for the emergence of First Wave Feminism in Australia during 1880's-1890's was due to the popularity the feminist movement was getting in other parts of the World particularly Britain, as many women from Britain immigrated to colonies in Australia in search of a new lifestyle. With them they brought their views on equality between the sexes. Many of the women's organizations which first wave feminism thrived on were organized to fix unjust actions in the Colony towards, the women occupant of the colony.17 First wave feminism had a positive effect, restoring moral standard's into Colonies, in which women were treated as chattel of men and were subjected to many prolific crimes by their male counterparts who saw females as inferior. First Wave Feminism in Australia, opened a door of opportunity for women to enter the political domain as equals to males which was a first in Australian History. ...read more.