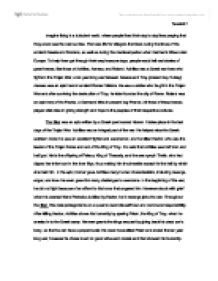 Imagine living in a turbulent world, where people lived their day to day lives praying that they would see the next sunrise. That was life for villagers that lived during the times of the ancient Greeks and Romans, as well as during the medieval period when Germanic tribes ruled Europe. To help them get through their very insecure days, people would tell oral stories of great heroes, like those of Achilles, Aeneas, and Roland. Achilles was a Greek war hero who fights in the Trojan War, a ten year long war between Greece and Troy (present day Turkey). Aeneas was an epic hero in ancient Roman folklore. He was a soldier who fought in the Trojan War and after surviving the destruction of Troy, he later founded the city of Rome. Roland was an epic hero of the Franks, a Germanic tribe in present day France. All three of these heroes played vital roles in giving strength and hope to the peoples of their respective cultures. The Illiad was an epic written by a Greek poet named Homer. ...read more.

He even grants the kings request by giving back his dead son's body, so that he can have a proper burial. He could have killed Priam and ended the ten year long war, however he chose to act on good virtue and morals and that showed his humanity. Aeneas, the Trojan born epic hero in Virgil's Aeneid, was Rome's mythical founder. His father was Prince Anchiseses, who was the second cousin of the King of Troy, King Priam. His mother was Venus, the god of love, beauty, and procreation. Like Achilles, Aeneas was also part god, part man. His mission was to gather any survivors from Troy and take them on a journey to Italy, where he will establish the city of Rome. On his journey however they end up settling in Carthage where he meets and has a long affair with the beautiful Carthaginian princess, Dido. While in Carthage, the messenger god, Mercury, leaves Aeneas a message. The message was to remind him to leave Carthage and proceed to Italy and end his love affair with princess Dido. ...read more.

He was a noble Frenchman, who died at the hand of power and land hungry, Islamic forces. At the end of the story, it is said that he died while he was chasing away the pagans. To this day, in the 21st century, homo sapiens still write stories about heroes that will save them and society. The number one characteristic that describes a hero is one that has a Stoic sense of duty that can overcome the desire for personal fulfillment. Achilles, Aeneas, and Roland were all created to create personal comfort for their people that lived in such a hectic and dangerous world. These three protagonists who were viewed by their cultures as gods also showed their people that they did portray human characterists (two out of the three even die) and that anyone can be like them if they tried. In a way they were used to inspire their respective residents to be better civilians in their community. If everyone could follow that, than living in a turbulent world would go from reality to fiction. ?? ?? ?? ?? Tavakoli 1 ...read more.