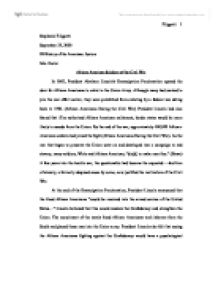 As other issues, such as slavery's expansion into the territories, sharpened the sectional divide, abolitionism and its vocabulary of freedom and race toleration gained basic legitimacy. Although most white Americans still saw abolition as a threat to the carefully balanced peace between Northerners and Southerners, and between African Americans and whites, abolitionists had made emancipation a part of the nation's moral imagination. With the coming of war, there was no better time than a moral crusade to free the enslaved. President Abraham Lincoln's shift toward emancipation must be viewed as an extraordinary transformation. Without a doubt, Lincoln's response had strategic objectives. President Lincoln hoped that the Emancipation Proclamation would eventually persuade the South to become a part of the Union again. 1 Filippetti ...read more.