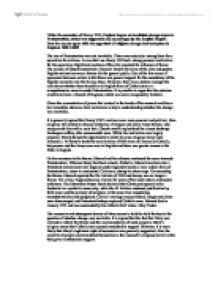 After the accession of Henry VIII, England began an inevitable change towards Protestantism, which was supported and encouraged by the English People'. How far do you agree with the appraisal of religious change that took place in England 1500-1600?

'After the accession of Henry VIII, England began an inevitable change towards Protestantism, which was supported and encouraged by the English People'. How far do you agree with the appraisal of religious change that took place in England 1500-1600? The rise of Protestantism was not inevitable. There was certainly a strong force for a separation from Rome. As we shall see Henry VIII had a strong personal motivation for the separation. Significant sections of the elite resented the influence of Rome. The seizure of Church assets had a financial benefit for some of the elite and gentry. English nationalism was a feature for the general public. One of the few areas of agreement between writers is that there was general support for the ascendancy of the English monarch over the Roman Pope. However, there was a debate amongst the elite about whether there should be an English form of Catholicism or a comprehensive move towards Protestantism. It is possible to argue that the outcome could have been a Church of England, which was more recognisably Catholic. Given the concentration of power that existed in the hands of the monarch and his or her immediate advisors, their motivation is key to understanding whether the change was inevitable. ...read more.

Most of the population regarded interference by foreigners to be an affront to English nationalism. Mary resisted advice to take a more pragmatic and cautious approach, even from the Pope himself. If Mary had re-introduced the return of Catholic religious practices, without the ending of royal supremacy and overt persecution she would have been more likely to create consensus. She was succeeded by her Protestant half-sister Elizabeth. She pursued a religious middle way, as the best means of stabilising her authority and securing peace. As we shall see Elizabeth was most successful because her approach was more broadly aligned to the will of the people than her two predecessors. Elizabeth was disinclined to pry into her subject's innermost thoughts, and as long as they offered outward conformity and political loyalty, she was prepared to turn a blind eye to many things. However, for those who offended her the punishment was hard. Elizabeth restored England to the Protestant camp, but to the moderate wing. Elizabeth understood that her country was being torn apart by the warring doctrines. While she repealed Mary's Catholic legislation, she did not return to Edward's more austere Protestantism. Rather, she worked out a compromise church that retained as much as possible from the Catholic church while putting into place most of the foundational ideas of Protestantism. The expression 'English People' requires further examination. ...read more.

The evidence for this is that the majority of people adjusted themselves to Mary's restoration of the Catholic Church and Elizabeth's subsequent return to moderate Protestantism. CONCLUSION From the point that Henry broke with the Church of Rome it was highly likely that a Church of England would develop. It was not inevitable that the Church of England would be Protestant. At the end of Henry's reign the English church was still Catholic in form. Edward attempted to move the Church towards Calvinism, but his reign was too short for him to achieve a fundamental change. Had Mary's reign been longer and /or her approach been more pragmatic she may have achieved her Restoration of Catholicism. Elizabeth's compromise was the most successful because she recognised that the Protestant Reformation had not comprehensively won over the hearts and minds of the people. The notion of the English people is problematic. The contention that Protestantism was "supported and encouraged" by the people is even more difficult. If it was the people pushing for the Reformation it is likely that Elizabeth's reforms would have been more radical and less of a compromise. Therefore, it was more the actions of the monarchs, rather than will of the people that pulled the country into the Reformation. ...read more.