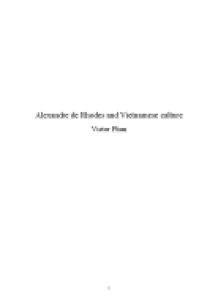 ﻿Alexandre de Rhodes and Vietnamese culture Victor Phan Alexandre de Rhodes The consequences of the Jesuits[1] and their attempts to convert those in far off lands to Christianity have had both positive and negative effects. One of the more remarkable men from the Jesuits was Alexandre de Rhodes, an enlightened and brilliant man who has had a powerful and lasting effect on the country of Vietnam. Figure 1: A portrait of Alexandre de Rhode wearing a black robe, and also leaving his hair to fall down to his shoulders[2] Alexandre de Rhodes, born at Avignon (Southern France) on the 15th March, 1593[3], was a Jesuit missionary who was admitted to the Society of Jesus at Rome in 1612 with the intention of devoting his life towards the converting infidels.[4] The vast amount of dedication he had put towards the new venture of evangelizing and establishing missions in Indochina (namely Vietnam[5]) and other works in the majority of his lifetime has allowed him to achieve an acknowledgement of his missionary work from the Vatican bureaucracy for his effort in converting some 6,700 Vietnamese to the Roman Catholic faith as well as the respect from the Modern Vietnamese people for creating a national language (script) accessible for any class in the hierarchy of the Vietnamese society. Consequently, this caused many controversies in the country of Vietnam, and de Rhodes was banished from the land later on in his life despite his contribution and love to the country, we will discuss this in a later section of this document. The Society of Jesus The Society of Jesus[6] is a religious order dedicated to Christianity, and had been founded as the Company of Jesus by Saint Ignatius of Loyola and other students at the University of Paris in 1534[7], only until 1540, was the order officially approved its formation by Pope Paul III.[8] The purpose of the organisation was to train students, such as de Rhodes, through the pathway of theology in order to dedicate themselves solely into apostolic works such as evangelization and converting as many people to Christianity as possible. ...read more.

One of de Rhode's first teachers was an 11-12 year old Vietnamese boy, who later took on the name of Raphael Rhodes. Raphael Rhodes was one of de Rhode's first converts in Vietnam, and formally became de Rhode's loyal assistant in the following works of de Rhodes on evangelization in Vietnam as well as neighbouring countries such as Laos. The development of a new script not only allowed the illiterate to become better educated because of the simplicity of the phonetic system of Quá»c Ngá»¯, but also granted de Rhodes the ability to communicate towards numerous people in the Vietnamese society. Ultimately this would mean that de Rhodes could publish works regarding to Christianity in his Vietnamese script to evangelize a larger portion of Vietnam, for example, Cathechismus[24], is a book regarding to the teachings of Christianity, written in Quá»c Ngá»¯. The fact that the more followers de Rhodes gained, the more he would potentially gain, raised many issues for a vast number of minority groups existing within Vietnam. Namely groups such as non-Christian religions as a whole (Buddhism, Yao/Dao, Confucianism, etc.) who lost their followers, housewives who converted and were then harshly dismissed by men, even eunuchs who would lose their jobs if their lord converted. Contrasting de Rhodes Prior to Alexandre de Rhodes's arrival to Vietnam, we have mentioned that he spent six months learning Astronomy and Mathematics. De Rhodes's tactic of evangelization was not to be by manipulating the Vietnamese people until baptism, which he learnt from his observations in Goa, but by presenting towards the people his true beliefs, not only was it before their full conversion that he was sincere towards them, making de Rhodes an enlightened man. Along with his sincere treatment to the Vietnamese people, he had convinced the truth of Christianity towards the Vietnamese not by assumption that they will believe in what he said, but by putting forward a scientific method to help him persuade the people into Christianity. ...read more.

Chá»¯ Nôm, the date on the inscription translated into the Christian calendar suggests that the stele was created in the year 1343 and may have been inscribed years from then on. A scholar named Nguyá»n vÄn Tá» disagreed with this hypothesis and traced back to a Vietnamese hero, Phùng HÆ°ng, who overthrew the current Chinese governor in 791 A.D., was given the title of Bá» Cái Äáº¡i VÆ°Æ¡ng (Father and mother of the people), the words in this title had only been given meaning once Chá»¯ Nôm was adapted as a system. This therefore implies that Chá»¯ Nôm could have existed before the 8th century. A third hypothesis, pointed out by another Vietnamese scholar named Sá» Cuá»ng, had put forward a complex argument, deconstructing Vietnamese literature and deducing the derivatives of the pseudonyms of the line of Vietnamese emperors. Sá» Cuá»ng made a solid attempt to prove that Chá»¯ Nôm dated back somewhere from 187-226 A.D. [18] Hàn Yu is an influential poet and writer of the Tang dynasty in China, who before Hàn Thuyên, wrote a letter to a crocodile to banish it from the Wu River. [19] The Lê dynasty in Vietnam from years 1428-1788 [20] The Nguyá»n dynasty in Vietnam from years 1802-1945 [21] Tinh, V. T., Chu Nom, Ancienne Ecriture du Vietnam Formation Historique Un mouvement d’émancipation de l’emprise culturelle chinoise, Retrieved 26th August 2012 from http://thehuuvandan.org/chunom.html [22] Quá»c Ngá»¯ was a Romanised script, which included Latin characters such as those of the English alphabet, but also with diacritical or phonetic markings to indicate the tone of the character, since the Vietnamese language consists of 6 different tone sounds. [23] TrÆ°Æ¡ng, V. K. (1867) Abrégé de grammaire annamite, Saigon, Imprimerie Imperiale, p. 8 [24] Rhodes, A. (1651) Cathechismus, Rome, Typis Sacre Congregationis de Propaganda Fide. [25] Maggs, B. W. (2000) The Catholic Historical Review, Vol. 86, No. 3, Catholic University of America Press, p. 446 [26] Mariko, K. (2009, February 24) Christianity’s long history in the margins, Retrieved from http://www.japantimes.co.jp/text/nn20090224i1.html ...read more.