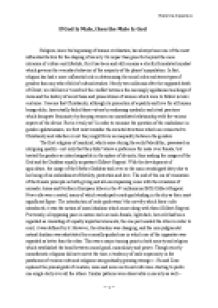 Although there is no passage in the Bible which explicitly states the absolute dominance of male over female, one is indisputably left with the feeling that men have a stronger connection with the Christian God

﻿Ekaterina Anguelova If God Is Male, then the Male Is God Religion, since the beginning of human civilization, has always been one of the most influential factors for the shaping of society. Its impact has gone far beyond the mere intrusion of culture and lifestyle, for it has been and still remains a strictly formulated mindset which governs the everyday behavior of the majority of the planet?s population. In fact, religion has had a more influential role in determining the social roles and stereotypes of genders than any other field of cultural studies. Nearly two millennia after the supposed death of Christ, we still haven?t resolved the conflict between the seemingly egalitarian teachings of Jesus and the history of sexist bans and prosecutions of women which were to follow in later centuries. It seems that Christianity, although its promotion of equality and love for all human beings alike, has actually failed these virtues by endorsing symbolic and ritual practices which denigrate femininity by denying women an unmediated relationship with the various aspects of the divine. But is it truly so? In order to examine the question of the misbalance in gender egalitarianism, we first must consider the societal structures which are connected to Christianity and whether or not they might favor an inequality between the genders. The first religions of mankind, which arose during the early Paleolithic, possessed an intriguing quality ? not only that they didn?t show a preference for male over female, but treated the genders as interchangeable in the sphere of divinity, thus making the images of the God and the Goddess equally important (Gilbert-Rogers). ...read more.

This early tolerance was partially due to the variety of Christian sects one could be a part of and the various gospels which later became apocryphal. At the time, the lack of a common institutionalized church and an official religious scripture allowed Jesus? followers to interpret his teachings in any way they deemed as appropriate, resulting in a more relaxed opinion concerning the accusation that women were temptresses by nature and their destructive passions had to be restrained. Nevertheless, with time, the structure of Christianity became more rigid. After Christian worship was legalized in 313 as a decision of the Council of Milan, it also was made the official religion of the Eastern Roman Empire by Constantine, providing an ideal basis for the formation of a theocratic state. In political terms, this was very handy as the emperor was now regarded not just as a ruler of the people but also as a living manifestation of the justice of the Lord on Earth. However, in social terms, this was another strong factor to widen the gap between men and women by stressing on the importance of male sovereignty. After the unavoidable collapse of the ancient empires, Europe was plunged into an era of war caused by the lack of centralized reign, unsteady economies and terrible plagues. All of these disasters naturally lead to the further hardening of religious dogma, as people thought that their faith in God could provide them liberation from the misfortunes of the sinful material world by earning a place in Heaven. ...read more.

and its messages are not ones of intrapersonal competition and providing proof that one is better than the rest, but are concerned with the common well-being of all people regardless of their differences. As idealistic as it sounds, there is an ongoing change in the way people see the teachings of Jesus. Perhaps it is a shift to the last of Kung?s paradigms, the beginning of an age of enlightened Christianity which is beyond institution and dogmatic rules, or maybe human beings, after all the wars and bloodshed throughout history, are starting to realize that underlining our differences is not the proper way to go. A couple of years ago, when asked by researchers Sally Gallagher and Christian Smith about his views concerning marriage, a young evangelist answered so: ?Some believe women should be submissive. Well, in a sense, everybody has to be submissive. We are submissive, my wife is submissive to me, but?I have to be just as submissive to her. I have to love her as Christ loved the church, willing to die for her, which is perhaps more difficult to do?. In the gentle wisdom of these words lies not only the echo of the messages of old scholars like Augustine, but the general truth that all relationships, be it between wife and husband or man and God, must be based on respect and love without concern who is more powerful; for a bond between two beings is not an indication that one is stronger than the other but a sign of equality between them . ...read more.