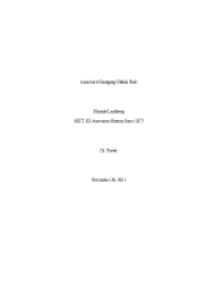 America emerged as a world power after the Spanish-American war.

﻿America's Changing Global Role Rhonda Lundberg HIST 102-American History Since 1877 Dr. Poster November 20, 2012 ________________ Lundberg 1 The United States went to war with Spain in April of 1898 in order to help the Cubans secure their independence and end the revolutionary war which had killed thousands, as well as to protect U.S. economic interests. The end of the war culminated in an announcement to the entire world that America was now a global power, and as being such, would also become a major participant in world events. Becoming a world power, America's global role in the world changed in several ways. (Henretta 2010) America, as an industrialized nation, had explored the western frontier, searching for land, wealth and freedom. All of the land in the western frontier had been settled during this time of great expansion, and as the country understood Manifest Destiny as believing that U.S. ...read more.

The United States Navy looked to locations in the Pacific and Caribbean which would Lundberg 2 serve as strategically placed military bases and coaling stations which would enable refueling of warships as well as maintain auxiliary vessels. (Ivan 1998) After the Civil War, only 25 naval ships were seaworthy out of the 125 on the Navy's active list. Although a program upgrade began in the mid 1880's, the fleet was mostly used for coastal defense. Around this time, Naval strategist Captain Alfred T. Mahan stressed the importance of a strong Navy that could defend American commerce, as well as its bases overseas. Mahan also said that the naval fleet should be strong and capable of striking anywhere in the world. Congress appropriated emergency funding of 50 million dollars which expanded the construction of a new level of steel warships and auxiliary craft which would maintain deployed fleets worldwide. ...read more.

The nationalists laid siege to Peking embassies and Hay, afraid that the revolt would break up the Chinese Empire, called for all countries to respect China's territorial and administrative integrity. On August 14, coalition forces from those countries essential to the new policy arrived in Peking and quelled the rebellion. In this way, too, the United States extended its influence and presence in Asia, as well as in Central America and the Caribbean. (State 2010) America emerged as a world power after the Spanish-American war. It acquired new territories, expanded its Navy to a worldwide presence and established new trade markets with other countries while also extending its influence and presence in world affairs. America's role also stayed the same in some ways after the war. America has remained imperialistic, and has in ways been a force for the greater good in the world. The United States has helped to eradicate communism, overthrow dictators and despots, while it paves the way for democracy and all of the freedoms some countries are unable to attain on their own. ...read more.