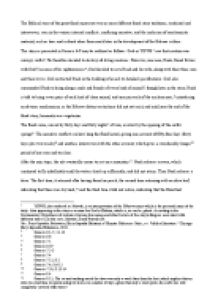 An Examination of the Biblical Flood Story

﻿The Biblical story of the great flood represents two or more different flood story traditions, combined and interwoven, seen in the various internal conflicts, confusing narrative, and the inclusion of anachronistic material, such as laws and cultural ideas from much later in the development of the Hebrew culture. The story as presented in Genesis 6-9 may be outlined as follows: God or YHWH[1] saw that creation was corrupt, sinful.[2] He therefore decided to destroy all living creatures. However, one man, Noah, found favour with God[3], because of his righteousness[4]; God decided to save Noah and his wife, along with their three sons and their wives. God instructed Noah in the building of an ark to detailed specifications. God also commanded Noah to bring along a male and female of every kind of animal[5], though later in the story, Noah is told to bring seven pairs of each kind of clean animal, and one pair each of the unclean ones,[6] introducing an obvious anachronism, as the Hebrew dietary restrictions did not yet exist, and until near the end of the flood story, humanity was vegetarian. ...read more.

a formal covenant with humankind (rather than just deciding ?in his heart?), and places the rainbow as a sign of the covenant.[20] God, although acknowledging that humans are naturally inclined to do evil,[21] has formed the beginning of a new relationship with humanity, based on humanity obeying God's will in exchange for protection and providence. The flood myth probably originated in Mesopotamia, predating the Biblical story. In the Mesopotamian version, the flood is brought about because of overpopulation, humanity making so much noise that it disturbs the gods.[22] One man is saved, Atrahasis or Utnapishtim[23], along with his wife, due to his own wisdom and the favour of the god, Ea, who warned him in advance to build a boat, which he does, and brings along pairs of animals to repopulate the earth. The flood lasts for six days and seven nights[24], and the test made to see if the waters had receded was to send forth a dove, which returned, then a swallow, which returned, then a raven, which did not return.[25] Then, as in the second narrative ...read more.