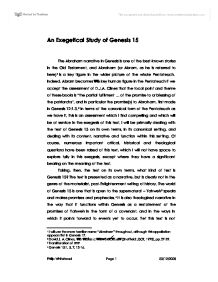 An Exegetical Study of Genesis 15

An Exegetical Study of Genesis 15 The Abraham narrative in Genesis is one of the best-known stories in the Old Testament, and Abraham (or Abram, as he is referred to here)1 is a key figure in the wider picture of the whole Pentateuch. Indeed, Abram becomes the key human figure in the Pentateuch if we accept the assessment of D.J.A. Clines that the focal point and theme of these books is "the partial fulfilment ... of the promise to or blessing of the patriarchs", and in particular the promise(s) to Abraham, first made in Genesis 12:1-3.2 In terms of the canonical form of the Pentateuch as we have it, this is an assessment which I find compelling and which will be of service in the exegesis of this text. I will be primarily dealing with the text of Genesis 15 on its own terms, in its canonical setting, and dealing with its content, narrative and function within this setting. Of course, numerous important critical, historical and theological questions have been raised of this text, which I will not have space to explore fully in this exegesis, except where they have a significant bearing on the meaning of the text. Taking, then, the text on its own terms, what kind of text is Genesis 15? The text is presented as a narrative, but is clearly not in the genre of the materialist, post-Enlightenment writing of history. ...read more.

sense of Yahweh's words to Abraham in 15:1 would be not to be afraid of any possible military reprisals for his action in chapter 14, since Yahweh will act as his "shield" and protect him from such attacks. In addition, Yahweh reiterates his promises to bless Abraham, first given in 12:1-3, by reassuring him that "your reward shall be very great". As the NRSV text suggests, the reward here is not viewed as Yahweh himself, so much as the blessings given by him to Abraham, principally (in view of what follows) that of descendants. Luther's translation "Ich bin dein Schild und dein sehr gro�er Lohn", and the NIV's corresponding "I am your shield, your very great reward" are much freer renderings - the "reward" is "first of all the innumerable posterity" first promised in 12:2 and again in 15:5.15 Yahweh here promises Abraham a reward, the nature of which is made clear by what follows. In terms of the structure of the passage, there seem to be two major sections of promise, questioning, and the giving of a sign to reinforce the promise: 15:1-6 deals with the question of Yahweh's promise to Abraham of descendants; and 15:7-21 with the promise of land. Whether these two incidents originally occurred together16 or not, it is significant that they are put together and narrated in a parallel way by the Pentateuchal author(s), since they both deal with different aspects of the divine promises of Genesis ...read more.

A detailed description of enslavement in Egypt, followed by return to the land and the taking possession of it is given. From the perspective of the Israelite author(s), this has already happened, making this technically a vaticinium ex eventu. However, from the perspective of the Pentateuchal narrative, which presents a picture of a strongly sovereign God,28 it is not at all inconsistent for Yahweh to make such prophetic statements to Abraham. Recorded here, it becomes an expression of Israel's faith in the sovereignty of Yahweh and a linking of the irrevocable promises made to Abraham to Israel via the Exodus tradition. Both of these sections are thus significant developments in terms of restating and defining the fulfilment of the promises given to Abraham in 12:1-3. The promise of descendants is reaffirmed and given new force by the suggestion that these will come through Abraham's own issue, and that they will be as numerous as the stars. The promise of land is reinforced and given a timescale, although one that places the reception of the land outside the lifetime of Abraham. Thus this chapter functions within the Pentateuchal narrative to point forward to the future fulfilment of the promises given in 12:1-3: Abraham's God is not unable to fulfil them, but in control of events and the timing of the fulfilment, and is the same God - Yahweh - as that worshipped by the Israelites. ...read more.