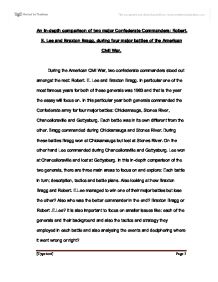 An In-depth comparison of two major Confederate Commanders: Robert. E. Lee and Braxton Bragg, during four major battles of the American Civil War. During the American Civil War, two confederate commanders stood out amongst the rest: Robert. E. Lee and Braxton Bragg. In particular one of the most famous years for both of these generals was 1963 and that is the year the essay will focus on. In this particular year both generals commanded the Confederate army for four major battles: Chickamauga, Stones River, Chancellorsville and Gettysburg. Each battle was in its own different from the other. Bragg commanded during Chickamauga and Stones River. During these battles Bragg won at Chickamauga but lost at Stones River. On the other hand Lee commanded during Chancellorsville and Gettysburg. Lee won at Chancellorsville and lost at Gettysburg. In this in-depth comparison of the two generals, there are three main areas to focus on and explore: Each battle in turn; description, tactics and battle plans. Also looking at how Braxton Bragg and Robert. E.Lee managed to win one of their major battles but lose the other? Also who was the better commander in the end? Braxton Bragg or Robert .E.Lee? It is also important to focus on smaller issues like: each of the generals and their background and also the tactics and strategy they employed in each battle and also analysing the events and deciphering where it went wrong or right? Robert. E. Lee was born on January 19th 1807 in Westmoreland Country in Virginia. Lee began his military career at the age of 18 when he entered the United States Military Academy or West Point in 1825. After success in the Mexico war in 1846, Lee started to make a name for himself. However it was not until June 1st 1862 that he fully became a general, gaining the title of commander of the army of Northern Virginia. ...read more.

To be sure, absent of this sort of luck, the odds against assaulting the Federal position were long. But lee had no choice. He could neither induce the Federals to make a major mistake nor put his army in a position to exploit one unless he went on the offensive. Meade however recognised that the Federal army could win simply by not losing. His lack of boldness and dash would make him, like McClellan, the target of scorn from shallow and superficial military analysts. But Meade's stolid qualities were poison for Lee.'ix Rafuse clearly believes that the union army, under the direction of Meade, had learned its lesson from Chancellorsville. He was not about to lose the battle by falling for Lee's tactics to draw him out. This in turn is a fatal reason as to why Lee lost at Gettysburg. Braxton Bragg is the second Commander this in depth comparison will look at. He was born in North Carolina on March 22nd 1817. He too, just like Robert. E .Lee was educated at West Point Military academy and also began to make a name for himself during the Mexican-American wars. On April 12 1862, Bragg was appointed a General in the Confederate army, one of only seven men in Confederate history to do so. Bragg's most famous battle was the battle of Chickamauga. The battle was the most significant Union defeat in the Western Theatre of the American Civil War and involved the second highest number of casualties in the war following the Battle of Gettysburg. Here, Bragg would face William Rosecrans. On the 19th September the battle began. Bragg had planned to attack the Union's left win in a flank attack. This did not really take in to effect as Bragg has misjudged the enemy's position. A clash between Brannan and Forrest's forces lead to an all-day battle between the two forces. ...read more.

General Bragg on the other hand had a not so impressive victory and an even more humiliating defeat. At Chickamauga, Bragg attempted to strategize the battle. However he greatly misjudged the enemies position and only by a stroke of luck, due to the enemy's lack of communication, did an opening for Longstreet occur to take advantage of a gap in the enemy line. But due to Bragg's lack of backing Longstreet up, this could not be fully exploited. Also due to the enemy's negligence, Bragg managed to push Rosecrans back and achieve a futile victory. However preceding this battle was Bragg's clash with Rosecrans at Stones River. Here Bragg began what would seem like an impressive start to any people. He went on the offensive and managed to push Rosecrans back. However his approach changed on the second day and after learning of reinforcements, cowardly began to retreat, ceding an easy victory to the Union. His actions at both battles where highly condemned by his subordinates. But due to a lack of a replacement Bragg kept his position. So after an in-depth comparison of both Commanders, who was the better General? Going by who achieved the most status and fame out of the war, then General Lee would clearly be the better General. However after assessing each battle more closely it becomes clear that both Generals had a degree of skill which they both clearly implemented in each battle. But it seems that in the majority of the four battles the Generals both somehow got lucky and due to other factors, such as Union blunders, strength of their officers and terrain differences, they both managed to pull a victory off. And in the case of their defeats, the Union also showed they too could implement strategy. However this is the role of the commanding general, to lead and guide his army into the fray of the battle, simply trying to secure their goal by any means possible. Going by this statement then both General Lee and Bragg came out on top. ...read more.