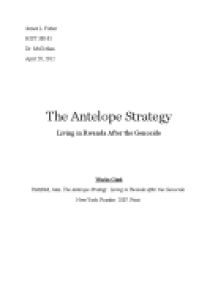 Analysis of Jean Hatzfeld's novel, The Antelope's Strategy: Living in Rwanda After the Genocide,

ï»¿James L. Fisher HIST 300-01 Dr. McClellan April 20, 2012 The Antelope Strategy Living in Rwanda After the Genocide Works Cited Hatzfeld, Jean. The Antelope Strategy: Living in Rwanda After the Genocide. New York. Picador. 2007. Print. Fisher 1 The genocide that occurred in 1994, in the African country of Rwanda, was a deliberate and structured attack by the Hutu tribe in which they sought to fully exterminate the Tutsi tribe. Post-genocidal Rwanda implemented a reconciliation strategy for the two tribes so that the country may progress peacefully. The Hutus and Tutsis struggled tremendously after being forced to live amongst each other once again without being allowed to speak of the massacre. Their difficulties are illustrated in Jean Hatzfeld's novel, The Antelope's Strategy: Living in Rwanda After the Genocide, in which Hatzfeld interviews both Hutus and Tutsis about their emotions and opinions towards the genocide and reconciliation. The Hutus and the Tutsis have had a difficult and strenuous relationship for decades that is fueled by politics. The Rwandan president, Juvénal Habyarimana, was in office from 1973 until his death in 1994. Habyarimana was a Hutu and therefore favored and supported them above the Tutsis. He warned the Hutus that if the Tutsis were to reclaim the throne, the Hutus would suffer just as their ancestors had and they would be forced to work without pay or share in the Rwandan harvest (Hatzfeld, p. ...read more.

They were taught to interact kindly and patiently with survivors, resist boastfulness, and never offer apologies or specific details of the murders (Hatzfeld, p.81). These actions were strictly forbidden because the gruesome truth of the killings would have only caused further chaos for Nyamata. These rules only meant further Fisher 3 agony for the Tutsis. They received no apology from the murderers they so narrowly escaped from in the Rwandan swamps and forests. They received no reparations from the government for their immense losses and many would never be able to claim the remains of their loved ones. The Tutsis were not even allowed to express their true feelings on the matter for fear of being reprimanded by the authorities for disturbing the peace. The Rwandan government implemented the gacaca court system into Nyamata in 2002. The gacaca, which literally means justice on the grass, was designed to promote healing and allow the country to move forward from the genocide (Hatzfeld, p. 241). The courts were a vital part of the new reconciliation policy of Rwanda, and were an attempt to aid the regeneration of society. The released Hutu criminals were often required to attend the gacacas and there they offered empty apologies for their crimes. The courts did little for the Tutsi survivors as many simply wanted to know where they could recover the remains of their loved ones. ...read more.

Reconciliation is obligatory for Rwandans because it is a state policy. The government is feared, and therefore obeyed but reconciliation is not taken to heart. The authorities have ultimately been fair to both the Tutsis and Hutus and although the two tribes are not quarreling, trust has not been reinstated. Apologies have not been offered by the Hutus and forgiveness has not been offered by the Tutsis. The Hutus and Tutsis typically avoid each other and intermarriage is rare. Interactions between the tribes tend to only occur on a superficial level. They might share drinks, give cows, or help each other in the fields Fisher 5 but they rarely partake in personal or intimate relationships with one another. Their indifference towards one another has made a true reconciliation all but impossible. For a true reconciliation to be made possible, several things must occur. The Hutus should offer a sincere apology to the Tutsis and in return, the Tutsis should give forgiveness and the Rwandan government should provide the Tutsi survivors with some form of reparation for their losses. In addition, the Rwandan government must not attempt to silence their citizens, but instead let them speak about the genocide and its effects so that there may be forgiveness and understanding between the two tribes. The differences between the Hutus and Tutsis are not so vast that they should dislike one another based on which tribe they belong to. If the Rwandan government were to allow for more personal interactions between Hutus and Tutsis, the country would have a much better chance at reconciliation and peace. ...read more.