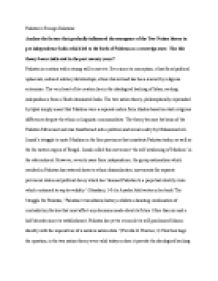 Analyze the factors that gradually influenced the emergence of the Two Nation theory in pre independence India which led to the birth of Pakistan as a sovereign state. Has this theory been vindicated in the past seventy years?

Transfer-Encoding: chunked ﻿Pakistan?s Foreign Relations Analyze the factors that gradually influenced the emergence of the Two Nation theory in pre independence India which led to the birth of Pakistan as a sovereign state. Has this theory been vindicated in the past seventy years? Pakistan is a nation with a strong will to survive. Ever since its conception, it has faced political upheavals, endured military dictatorships, ethnic discord and has been scarred by religious extremism. The very heart of its creation lies in the ideological backing of Islam, seeking independence from a Hindu dominated India. The two nation theory, philosophically expounded by Iqbal simply meant that Muslims were a separate nation from Hindus based on stark religious differences despite the ethnic or linguistic commonalities. The theory became the basis of the Pakistan Movement and was transformed into a political and social reality by Muhammad Ali Jinnah?s struggle to unite Muslims in the four provinces that constitute Pakistan today, as well as the far eastern region of Bengal. Jinnah called this movement ?the self awakening of Muslims? in the subcontinent. However, seventy years from independence, the group nationalism which resulted in Pakistan has watered down to ethnic dissimilarities, movements for separate provincial states and political decay which has ?damned Pakistan to a perpetual identity crisis which continued to sap its validity.? (Hamdani, 14) As Ayesha Jalal writes in her book The Struggle for Pakistan, ?Pakistan?s tumultuous history exhibits a daunting combination of contradictory factors that must affect any decisions made about its future. ...read more.

because had the theory been right, the government would agree to open borders and allow Indian Muslims to settle in Pakistan and exiled stranded Pakistanis living in Bangladeshi camps. Professor Samuel Martin Burke says that the two-nation theory was even more strongly asserted in that the Awami League rebels had struggled for their own country, Bangladesh, and not to join India. In so doing, they had put into practice the theory behind the original resolution to form Pakistan, which envisaged two Muslim states at the two extremities of the subcontinent. (Did Two Nation Theory?Bangladesh? 17) However it is important to realize the ideological fallacy that Pakistan was created on the grounds of TNT. Jinnah himself, as mentioned before, never stood parallel with the ideology behind the theory or considered it the groundwork for the formation of Pakistan. The separation of Bangladesh does not reflect on the failure of the Pakistan, but conforms to the initial idea envisaged by Jinnah to constitute two independent Muslim states at the extremities of the subcontinent. The Pakistan Resolution passes in Lahore 1940 demanded ?that the areas in which the Muslims are numerically in a majority as in the North-Western and Eastern Zones of India should be grouped to constitute "Independent States" in which the Constituent Units shall be autonomous and sovereign" (Did the two nation..Bangladesh? 21) Therefore, the idea behind Pakistan was to ensure autonomy and sovereignty for the Eastern Wing rather than path of resentment and bitterness that exacerbated relations between East and West Pakistan. ...read more.

The Congress presented a Hindu domination party and the malcontent Muslims elite refused to acknowledge it as an equal representative of Muslim rights and thus formed the rival All India Muslim League in 1906. The idea for a separate nation became stronger and more inevitable as can be seen when the Hindus rejected the Cabinet Mission Plan of 1946 which ensured a Muslim majority area with sovereign Muslim rights. These issues created a rift between the two entities until harmonious co-existence in the subcontinent became impossible for the Muslims. The Two Nation Theory, although an important drive behind uniting the Muslims of India, was not the reason which led to the formation of the potential ?inclusive democracy, not reliant on exclusivist theocracy? that Jinnah wanted. Two nation theory or not, the formation of a separate sovereign state for Muslims was a necessity to ensure a safe haven for the Muslims in light of the events that unfolded between the two communities in pre independence India. Even today, the unresolved dormant aggressiveness against the Muslims in India has started to bubble up in the form the Hindu chauvinist RSS and BJP government. Pakistan still suffers from an ideology crisis for a state which claims to have Islam as its backbone, however, for the sake of a better prosperous future of Pakistan, the ethnic issues needs to be resolved at the federal and provincial level to achieve the path for development and success for Pakistan as a whole, and not just the advancement of Punjab at the expense of other provinces. ...read more.