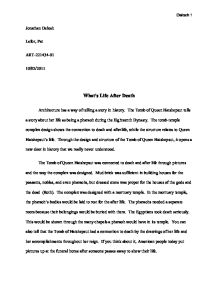 Architecture has a way of telling a story in history. The Tomb of Queen Hatshepsut tells a story about her life as being a pharaoh during the Eighteenth Dynasty.

The Tomb of Queen Hatshepsut was connected to death and after life through pictures and the way the complex was designed.  Mud brick was sufficient in building houses for the peasants, nobles, and even pharaohs, but dressed stone was proper for the houses of the gods and the dead  (Roth).  The complex was designed with a mortuary temple.  In the mortuary temple, the pharaoh’s bodies would be laid to rest for the after life.  The pharaohs needed a separate room because their belongings would be buried with them.  The Egyptians took death seriously.  This would be shown through the many chapels a pharaoh would have in its temple.  You can also tell that the Tomb of Hatshepsut had a connection to death by the drawings of her life and her accomplishments throughout her reign.  If you think about it, American people today put pictures up at the funeral home after someone passes away to show their life.

The after life was eternity for the Egyptians.  In front of Queen Hatshepsut’s cult statue, priests could make daily offerings of food, drink, music and incense that would allow the dead king’s soul to live forever.  There was an open-air court dedicated to the worship of the sun god Re-Herakhty which balanced the dark and gloomy mortuary chapels, chapels that linked the dead with the cult of Osiris (Queen Hatshepsut ).   The openness of the complex allows for the spirits to go freely with the gods and goddesses.  Art would play a big role in the soul’s crossing over to the after life.   There would be paintings in the mortuary temple of animals that would take the spirit over to their new world.  The painting would be of a human-headed bird.  The human-headed bird would represent the ba of Egyptians.  The ka would be represented with two raised arms.  It is believed that after a pharaoh dies the ba and the ka helps lead the soul to the after life.  It is said that a pharaoh had more than one ka since they become gods after they died.  The artistic walls proved that the Egyptians believed heavily in the after life and made sure that they had ka and ba painted on the walls, so their soul could cross over to the after life.

The structure of the Tomb of Hatshepsut symbolizes Hatshepsut’s reign in Egypt.  The temple-complex is structured in a half circle into the cliff.  The temple-complex is guarding the entrance to the Valley of Kings.  It symbolizes the protection Hatshepsut gives to the gods and the protection she needs from the gods during her rule.  It almost makes the temple seem untouchable by the surrounding cliff.  The cliff is being a blanket of protection where evil is not allowed in to harm the god’s.  The stones would help the building last longer for the continuing prosperity of the pharaoh’s and their eternal and forever lasting after life.

The three levels of the temple-complex represent her building up Egypt’s wealth during her reign.  Hatshepsut was able to build up the wealth of Egypt through the trade expedition that she had at Land of Punt.  She was able to bring back precious and rare articles that would help enhance the wealth of Egypt (The Accomplishments of Queen Hatshepsut).  I believe the reason why the temple-complex is three tiered is to show and bring the wealth and prosperity to the gods.

Elegance and harmony comes to mind when looking at the structure of the temple.  The structure of the three layers represents the pattern of pyramids that would be built in earlier times.  She brought the old structure and modernized it to a newer structure.  I think this symbolizes old traditions coming with the new traditions.  Males would be the dominant figures in Egyptian history where you rarely see a female take the throne.  Hatshepsut showed proof that she had the right to take the throne by dedicating her temple to her mother Hathor and her father Amun who was once a pharaoh.  She did this elegantly through having chapels and statues for her parents.  Also, Hatshepsut had statues made of her overlooking the valley.  She showed that she had royal power over the nation and that she was protecting the land against enemies.  The statue of the lion with Hatshepsut’s face on it I believe was built to show her power and strength as a pharaoh.  This structure shows the power of a woman in a history where women had very little power.  It connects a powerful animal to a woman that rarely had power.  The lion statue with Hatshepsut face symbolizes the guardianship from the sun while showing who the guardian king was at the time against evil.  Also, the temple-complex brings harmony among all of the gods underneath one building.

In conclusion, architecture has a way of helping us understand history better.  The Tomb of Queen Hatshepsut was able to show the important connection of death and after life.  The structure illustrates that life of a powerful woman during the Eighteenth Dynasty.  Architecture is the face of history that opens new doors that have been undiscovered or forgotten about.