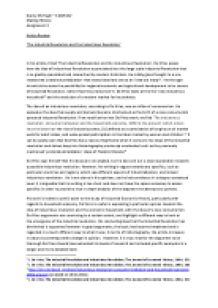 easily seen that De Vries has a reoccurring theme when it comes to his ideas of the industrial revolution and delves deep into historiography previously overlooked such as the previously mentioned ?protoindustrialization? ideas of Franklin Mendel.[4] De Vries says himself that his ideas are not original, but he does set out a clear explanation towards a possible industrious revolution. However, his writing is vague towards any specifics, such as particular countries and regions, which saw different aspects of Industrialisation, and indeed industrious revolution. He is not alone in his opinions, yet he lacks evidence in a deeper contextual level. It is arguable that his writing is too short and does not have the space necessary to assess specifics in order to provide a true in depth analysis of the argument he attempts to portray. ...read more.