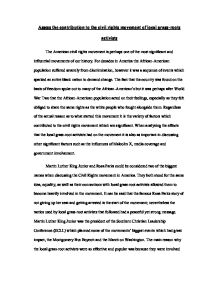 Assess the contribution to the civil rights movement of local grass-roots activists The American civil rights movement is perhaps one of the most significant and influential movements of our history. For decades in America the African-American population suffered severely from discrimination, however it was a sequence of events which sparked an entire black nation to demand change. The fact that the country was found on the basis of freedom spoke out to many of the African-American's but it was perhaps after World War Two that the African-American population acted on their feelings, especially as they felt obliged to share the same rights as the white people who fought alongside them. Regardless of the actual reason as to what started this movement it is the variety of factors which contributed to the civil rights movement which are significant. When analysing the effects that the local grass-root activists had on the movement it is also as important in discussing other significant factors such as the influences of Malcolm X, media coverage and government involvement. Martin Luther King Junior and Rosa Parks could be considered two of the biggest names when discussing the Civil Rights movement in America. They both stood for the same idea, equality, as well as their connections with local grass-root activists allowed them to become heavily involved in the movement. ...read more.

The fact that each person was willing to die for the cause, "I think all of us were prepared for as much violence as could be thrown at us. We were prepared for the possibility of death" 5 , demonstrated that they would not be stopped and for the entire black nation to see it gave every single African-American a purpose and showed what unity could do, which it did. When one of the busses arrived in Birmingham and was burned to ashes it allowed the media to intervene which exposed America as being a racist and prejudice nation - not what the Kennedy's wanted. As a result of the coverage it angered the southerners even more so but more significantly it created even more awareness about the situation. With the combination of very skilled public speakers, like Martin Luther King, as well as the support from grass-root activists and their supporters it was inevitable that at least some sort of voice would be heard- instead millions of voices were heard through the mouth of Martin Luther King junior and through the courageous efforts maintained by the black population across America. The civil rights movements for many people represent Martin Luther King and Rosa Parks; however there were other important factors which also contributed greatly to the civil rights movement. ...read more.

It is undeniable that all factors combined helped contribute to the civil rights movement. However Martin Luther King and the grass-roots activists did influence the campaign to quite an extent. Martin Luther King's methodology of not fighting back with fists but fighting back with words really exposed the racism and violence being thrown at them. As a result of this it allowed the media to step in to show the world that it was white people- not the African Americans who were the trouble. On top of the efforts from the local grass root activists Malcolm X's influence was still very much influential, like Martin Luther King, which meant fought harder after their death as violence had not stopped them before so it would not stop them now. To put the civil rights movement down to one influence would be highly unfair, however it can be said that Martin Luther King Junior and the local-grass roots activists were perhaps the most prominent in the civil rights movement. This is because of the way he managed to get white people and black people to protest together in peace, to make 250,000 people march in silence as he gives one of the most famous speeches of all time and that even after his death people pushed forward to gain equality. Even today Martin Luther King is such an influence and no one will ever forget the efforts of every individual who fought for their rights. ...read more.