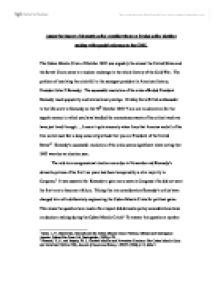 Assess the impact of domestic policy considerations on foreign policy decision making with special reference to the CMC.

Assess the impact of domestic policy considerations on foreign policy decision making with special reference to the CMC. The Cuban Missile Crisis of October 1962 was arguably the closest the United States and the Soviet Union came to a nuclear exchange in the whole history of the Cold War. The problem of resolving the crisis fell to the youngest president in American history, President John F Kennedy. The successful resolution of the crisis afforded President Kennedy much popularity and international prestige. Ormbsy Gore British ambassador to the US wrote to Kennedy on the 30th October 1962 "I am lost in admiration for the superb manner in which you have handled the momentous events of the critical week we have just lived through.....I mean it quite sincerely when I say that America and all of the free world must feel a deep sense of gratitude that you are President of the United States"1 Kennedy's successful resolution of the crisis seems significant when noting that 1962 was also an election year. The mid-term congressional election were due in November and Kennedy's domestic polices of his first two years had been hampered by a slim majority in Congress.2 It was essential for Kennedy to gain more seats in Congress if he did not want his first term to become a failure. Taking this into consideration Kennedy's critics have charged him with deliberately engineering the Cuban Missile Crisis for political gains. This raises the question how much of an impact did domestic policy considerations have on decision making during the Cuban Missile Crisis? To answer this question a number of factors need to be examined. ...read more.

were not holding office. From this perspective it was probable the congressional elections would have little effect on the political make up of the new congress. Furthermore domestic concerns such as civil rights and medical care were becoming the centre issues. Also Kennedy's handling of the Mississippi crisis; the violence surrounding the enrolment of James Meredith a black student at the University of Mississippi in September had swayed favour in a number of key northern industrial states. However Kennedy's role in the Bay of Pigs fiasco gave the Republicans the chance to heavily criticise the Kennedy administration diverting attention away from their own political vulnerabilities. In the summer of 1962 Republicans charged the administration for underestimating the Soviet military presence in Cuba and for withholding information. The Republican senator from New York Kenneth B. Keating8 claimed that there were missiles on Cuba although he did not distinguish between defensive missiles Surface to Air (SAMS), or offensive Surface to Surface missiles (Medium Range Ballistic Missiles MRBMS and Intermediate Range Ballistic Missiles IRBMS). Kennedy took the initiative over the issue by asking Congress for standby authority to call up one hundred and fifty thousand military reservists. On 29th September the Senate adopted the Cuban Resolution; it is worth noting that the Republicans succeeded in making Cuba a troublesome issue for the Democrats who were put in the position of looking like they were hiding something. Opinion polls showed that Cuba had grown into a dominant issue however Kennedy still tried to stress the domestic issues. The U2 photographs of Cuban missile bases being built in the San Cristobal area on 16th October 19629 confirmed Republican accusations and fermented the Issue as the political weakness of the Kennedy administration. ...read more.

In conclusion it is evident that President Kennedy did not engage Cuba and the Soviet Union to attract votes to the Democrats and silence his Republican critics. As I have previously argued in the run up to the November 1962 elections there was no need for the Democrats to manufacture a war scare as they were already winning the campaign on domestic issues. What seems to be the over riding factor in Kennedy's decisions during the missile crisis was the quick successful resolution of the crisis in a manner that did not provoke a Soviet reaction but maintained American prestige and the faith of the European allies in American security. It is apparent that the Cuban missile crisis changed the attitudes of both leaders. This is strikingly evident when analysing Kennedy's inaugural speech of January 1961 with a 1963 American University address. In his inaugural speech he asks the American people to "bear any burden" to "pay any price" in the struggle against communism where as in his University address he says "If we cannot now end our differences, at least we can help make the world safe for diversity....We labour on - not toward a strategy of annihilation, but toward a strategy of peace."17 The Cuban Missile Crisis facilitated the move to d�tente it helped establish the Moscow Washington Hotline, the 1963 Atmosphere test ban and the trade of some $250 million of wheat to the Soviet Union.18 This period of D�tente however was short lived with the assignation of President Kennedy and the Replacement of Khrushchev in the Soviet Union new leaders emerged and with them new policies and Cold War tensions again began to rise. ...read more.