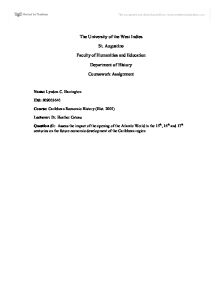 Assess the impact of the opening of the Atlantic World in the 15th, 16th and 17th centuries on the future economic development of the Caribbean region

The University of the West Indies St. Augustine Faculty of Humanities and Education Department of History Coursework Assignment Name: Lyndon C. Harrington ID#: 809001640 Course: Caribbean Economic History (Hist. 2005) Lecturer: Dr. Heather Cateau Question #1: Assess the impact of the opening of the Atlantic World in the 15th, 16th and 17th centuries on the future economic development of the Caribbean region Greed is an excessive desire to possess wealth or goods; the word greed in Latin can also be known to mean avarice or covetousness and like the sins of lust and gluttony, the sin of greed is one of excess. Now define irony, the same people who came to the Caribbean to colonize in the name of God were compelled by greed. Saint Thomas Aquinas, can be quoted as saying that greed was "a sin against God, just as all mortal sins, in as much as man condemns things eternal for the sake of temporal things." This is beside the point, however, if we look at the opening of the Atlantic World as what it represented other than what it was at surface level, the assessment would be greater. It is premised that, following the rise of sustained European contact with the New World in the 16th Century, the continents that bordered the Atlantic Ocean - the Americas, Europe and Africa - constituted a regional system or common sphere of economic and cultural exchange. ...read more.

The receiver (encomenderos) could exact tribute from the Indians and was required to protect them and instruct them in the Christian faithii). The Europeans could accomplish all of this for two reasons: technological superiority and disease.iii This miniature form of slavery would lead to the Europeans great dependency on human or physical labour to reap the rewards of newly colonized lands. This small relatively small scale benefit in the induction of slave labour (because that is what it was) by the Spanish depleting the Amerindian work force, this left other colonizers post-Columbus, the task of finding replacements. (What killed the Tainos in 1493 and 1495? Was it maltreatment, cold, hunger? Overwork? Yes, and no doubt about it, but could this be the entire answer? The hale and hearty immune system of one's prime years of life, when challenged by unprecedented invaders, can overreact and smother normal body functions with inflammation and edemaiv Death was the most common factor within colonization next to growth in metropolitan economy, the fall in said same, and the rise of other European countries being the envy of its rivals. The coming of the British, French, and the Dutch into the Caribbean came as a result of many endogenous factors, mainly, the growth of Spanish wealth in the New World. The rise of the Bullion concept and the effect of Mercantilism swung the hands of change. ...read more.