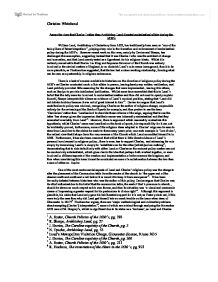 Assess the view that Charles I rather than Archbishop Laud directed ecclesiastical affairs during the 1630's William Laud, Archbishop of Canterbury from 1633, has traditionally been seen as 'one of the twin pillars of Stuart despotism'1, playing a key role in the formation and enforcement of ecclesiastical policy during the 1630's. However recent work on this area, mainly by Davies and Sharpe, has challenged this assumption, suggesting instead that it was Charles I who was the architect of change and innovation, and that Laud merely acted as a figurehead for his religious ideals. Whilst it is certainly conceivable that Charles I as King and Supreme Governor of the Church was actively involved in the clerical matters of England, to so diminish Laud's role seems incongruent, thus it is far more plausible, as Fincham has suggested, that the two had a close working relationship, forming what can be seen as a partnership in religious endeavours. There is a lack of sources available to historians on the direction of religious policy during the 1630's as Charles conducted much of his affairs in person, leaving barely any written verification, and Laud publicly provided little reasoning for the changes that were implemented , leaving it to others, such as Heylyn to provide intellectual justification. Whilst some have accredited that this to Laud's belief that the laity were too involved in ecclesiastical matters and thus did not need to openly explain himself, Sharpe interprets this silence as evidence of Laud's nominal position, stating that 'Laud did not debate doctrine because it was not of great interest to him'2. ...read more.

Whilst it seems clear that Charles did take his job as Supreme Governor of the Church seriously, demonstrated most distinctly via the comments that he made in the margins of his bishops' accounts of their diocese, a counter argument naturally exists as to whether Charles signatures can definitively be said to prove his comprehension of affairs. It likely that his bishops would have phrased their reports so as to portray themselves in as positive a light as possible, meaning that Charles' conception of progress may not have been entire, due to the possible inaccuracy of the information which he based his recommendations on. Foster's view of Charles concurs with this, as he claims that 'most of the comments which the King made on Neile's reports suggest a king dutifully reading dispatches... but woefully out of touch and responding to tactfully phrased suggestions from his ministers'13. There is also an implication from Charles' notations of the extent that he relied on Laud to carry out his bidding, for example, when replying to Laud's request that laymen be denied any further control over the hiring and dismissing of lecturers, Charles commands him 'to show me the way to overthrou this and to hinder the Performance in tyme to all suche Intentions'14, which demonstrates the reliance and trust that is placed in Laud by Charles independently to find solutions to such issues and to formulate policy that meets his expectations. ...read more.

be completely discredited, meaning that, as Foster states, the question of who was behind the policy is 'something of a red herring'23. Whilst Davies, with the support of Sharpe, maintains that Charles instigated a policy of 'Carolinism' and that Laud simply followed his orders, Tyacke and Capern (on the issue of Ireland) steadfastly defend Laud's position of power; no conclusion has yet been reached. Therefore, on the weight of this, it is possibly more prudent to reason that both Laud and Charles had significant roles in the creation and implementation of reform, and were formed into a partnership within which both had individual interests and priorities, as Fincham has suggested. This working relationship could feasibly be based on Laud and Charles' similar religious beliefs and a mutual necessity of one another; as of 1628 Laud was a marked man, having been ousted in parliament as an 'evil advisor' and thus required the Royal support to implement his reforms, whilst Charles was looking for another that he could trust to act in his interests as Buckingham had done before his assassination. However this interpretation is simply another hypothesis as there is no clinching evidence on which this is based, thus it must be professed that there is no real way of answering the question of whether Charles rather than Laud directed ecclesiastical affairs, although it seems much more likely that a strong working relationship based on trust and similar ideals existed between the two men than one based on dominance from either Laud of Charles. ...read more.