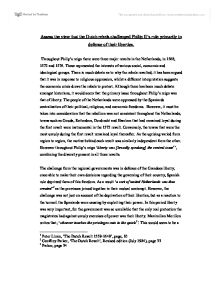 Assess the view that the Dutch rebels challenged Philip IIs rule primarily in defense of their liberties. Throughout Philips reign there were three major revolts in the Netherlands, in 1568, 1572 and 1576. These represented the interests of various

Assess the view that the Dutch rebels challenged Philip II's rule primarily in defense of their liberties. Throughout Philip's reign there were three major revolts in the Netherlands, in 1568, 1572 and 1576. These represented the interests of various social, economic and ideological groups. There is much debate as to why the rebels revolted; it has been argued that it was in response to religious oppression, whilst a different interpretation suggests the economic crisis drove the rebels to protest. Although there has been much debate amongst historians, it would seem that the primary issue throughout Philip's reign was that of liberty. The people of the Netherlands were oppressed by the Spaniards centralisation of their political, religious, and economic freedoms. However, it must be taken into consideration that the rebellion was not consistent throughout the Netherlands; towns such as Gouda, Rotterdam, Dordrecht and Haarlem that had remained loyal during the first revolt were instrumental in the 1572 revolt. Conversely, the towns that were the most unruly during the first revolt remained loyal thereafter. As the uprising varied from region to region, the motive behind each revolt was similarly independent from the other. However throughout Philip's reign 'liberty was [broadly speaking] the central issue1', combining the diversity present in all three revolts. ...read more.

The nobles may have exaggerated their case in order to spur Margaret into acting on their behalf, it was however, a clear stand against overbearing laws denying them their right to rule. Coupled with the Segovia letters16 in which Philip writes: 'as for the inquisition, it is my intention that it should be carried out' and then went on to request that Margaret 'do all that is necessary and not to agree to any different policy17.' The situation Bredrode described therefore became tenable. These letters resulted in the formation of the Compromise of the Nobility, a group dedicated to defending their liberty, which formed the main opposition to Philip and his armies in both the second and third revolts. The Netherlanders resented the imposition of Philip's rule as a foreigner. This created both a 'definite identification of the Low Countries as a unit distinct from foreigners18' and the stirrings of revolt; as Granvelle remarked in 1561: 'there will be trouble here sooner or later on some other pretext19.' This was significant as he was addressing Philip's Secretary of State, and so would have had no ulterior motive or reason to diverge from the truth and needed to give an accurate account of the current situation so he could be provided for by the State. ...read more.