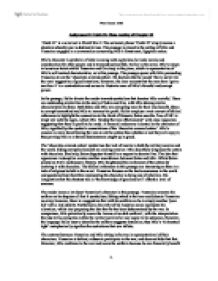 Assignment 2: Catch 22, Close reading of Chapter 24 'Catch 22' is a novel set in World War 2. The universal phrase 'Catch 22' simply means a situation whereby one is destined to lose. The passage is placed in the setting of Milo and Yossarian engaged in a conversation concerning Milo's investment, Egyptian cotton. Milo's character is symbolic of what is wrong with capitalism; he lacks morals and consideration for other people and is tremendously selfish. Earlier in the novel, Milo's sleeps in luxurious hotels whilst Yossarian and Orr sleep in the plane, which is representative of Milo's self centred characteristics, as is this passage. The passage opens with Milo persuading Yossarian to eat the 'chocolate covered cotton'. He declares that he would 'like to serve it to the men' suggestive of good intentions. However, the later account that the men have 'got to swallow it' is a contradiction and serves to illustrate more of Milo's forceful and corrupt power. ...read more.

His imagination that the chestnut tree is 'the knowledge of good and evil' affords a level of sarcasm. The reader learns a lot about Yossarian's character in this passage. Yossarian removes his uniform as he despises all that it symbolises. Sitting naked in the tree could denote Yossarian as crazy, however, there is a suggestion that with his uniform on he is simply another 'poor kid' with a lost identity. Furthermore, the rarity of his Assyrian name represents his alienation, whilst also proposing the idea that he has been dehumanised by the war. In comparison, Milo patriotically wears the 'coarse olive drab uniform', with the interpretation that due to his corruption within the military service he may aspire to be unknown. However, the language Heller uses to describe the uniform suggests restriction, thus Milo's 'tie knotted tight' metaphorically signifies the restrictions that war inflicts. The contrast between Yossarian and Milo sitting in the tree is representational of their characters. ...read more.

Mudd was 'killed before he even got into the squadron' due to Milo bombing the site to be rid of the Egyptian cotton. The very fact that Milo refuses to take responsibility of Mudd's death reinforces him as a greedy, selfish Lieutenant. Mudd is referred to as 'the dead man in [Yossarian's] tent', which reiterates the suggestion that the war dehumanises a person. This is a typical theme of war literature and supports the argument that capital is more imperative than life. In conclusion, this passage contains an interesting amount of themes and ideas that Heller incorporates into 'Catch 22' to create the dissimilar views and experiences of men at war; we must not assume men at war are homogeneous. Heller seems to be using humour to highlight the futility of war and the way in which it changes a man. Heller touches on events that are significant in displaying both one's character and their experiences. The passage continuously draws dissimilarities between Yossarian and Milo to create a distance of morals amid them. Word Count: 1000 1. ...read more.