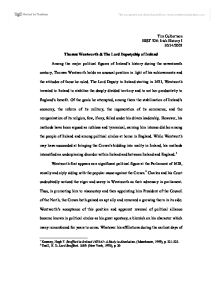 Tim Culbertson HIST 326: Irish History I 10/14/2003 Thomas Wentworth & The Lord Deputyship of Ireland Among the major political figures of Ireland's history during the seventeenth century, Thomas Wentworth holds an unusual position in light of his achievements and the attitudes of those he ruled. The Lord Deputy in Ireland starting in 1631, Wentworth traveled to Ireland to stabilize the deeply divided territory and to set her productivity to England's benefit. Of the goals he attempted, among them the stabilization of Ireland's economy, the reform of its military, the regeneration of its commerce, and the reorganization of its religion, few, if any, failed under his driven leadership. However, his methods have been argued as ruthless and tyrannical, earning him intense dislike among the people of Ireland and among political circles at home in England. While Wentworth may have succeeded at bringing the Crown's bidding into reality in Ireland, his methods intensified an underpinning disorder within Ireland and between Ireland and England.1 Wentworth first appears as a significant political figure at the Parliament of 1628, vocally and slyly siding with the popular cause against the Crown.2 Charles and his Court undoubtedly noticed the vigor and savvy in Wentworth as their adversary in parliament. Thus, in promoting him to viscountcy and then appointing him President of the Council of the North, the Crown both gained an apt ally and removed a growing thorn in its side. ...read more.

He first thought to increase Ireland's production of flax, hemp, and linen and increase the duties paid on these exports, developing a trade which would generate revenue for the island, provide further opportunities of employment, and serve as a source of these products for England. The second half of his dealings in the textile industry, however, brings back to light his dedication to not only make Ireland pay for itself, but additionally to provide a profit to England. By severely limiting the production of wool in Ireland, Wentworth opened up a monopoly in which England not only gained revenue as the exclusive supplier of textiles, but also gained monetarily through increased customs.11 These changes, though in many ways beneficial to Ireland's economic stability, won him few supporters, least of all among the New English planters upon whose livelihoods and profits he was encroaching. Seeking further income for the state, Wentworth, with Charles' blessing, called a parliament in 1634 for the purpose of obtaining from Ireland's inhabitants a subsidy. In its proceedings, this parliament was ingeniously contrived by Wentworth. The major factions within the voters consisted of the Old English and the New English. To the Old English, the Lord Deputy presented a choice between granting of subsidies and the establishment of recusancy fines. Further sweetening his deal, Wentworth dangled in front of their eyes the offer of statutory force for the Graces which the Catholics so desperately craved.12 On ...read more.

By now the name Wentworth had become closely tied with oppressive reforms, a Catholic army defending a Protestant state, and increased costs tied to an unpopular war.21 Thus, early in this new parliament, several flimsy charges of high treason were waged against Wentworth. While these charges were easily refuted, so great was Wentworth's unpopularity that on April 13 the House of Commons passed a bill of attainder calling for his execution. The bill passed through both the House of Commons and the House of Lords. Fearing the consequences of terminating this bill, Charles too added his signature, sentencing Wentworth to death on May 12. In the history of Ireland, Wentworth played a difficult role. A loyal officer of the king, his goals were always his master's. This attitude of obedience, however, was often blind in its methods. While Wentworth's intentions for the people of Ireland were, oftentimes, for their own good, his methods were heavy-handed, arbitrary, and absolutist. His position as the king's servant sweetened his job none. The jobs he was tasked with were unenviable to say the least and the unpopularity resulting from his obedient and dedicated service of these jobs must have been obvious to the Crown from the beginning. The agendas set in motion by Wentworth could have worked towards Ireland's benefit, had their methods been less extreme and more benevolent. His successes, however, exacerbated the disunion between England and Ireland and within Ireland itself, a factor which contributed to England's plunge into civil war shortly after Wentworth's death. ...read more.