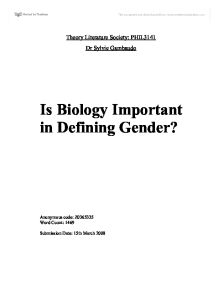 Theory Literature Society: PHIL3141 Dr Sylvie Gambaudo Is Biology Important in Defining Gender? Anonymous code: Z0365335 Word Count: 1469 Submission Date: 15th March 2008 The relationship between gender and biology is an increasingly complex issue. This essay will argue that traditionally in Western Culture, biology is seen as an important factor in defining gender; but that the emergence of a greater universal cultural awareness, recent philosophical, psychological and legal debate has lessened the biological emphasis in determining gender. It is now understood that maleness and femaleness encompasses many shades of grey both in a biological and a gendered sense. At face value Sex can be considered a biological term and gender a psychological, cultural and philosophical one. For a clearer understanding of their problematic relationship this essay will first clarify the terms, gender and biology (biological sex), focusing on basic baseline definitions. However, as the developing essay will show, even the scientific has problems with the straight binary and dualistic distinction of man and woman, complicating its relationship to gender further. In most contexts, sex is determined by biological factors and is binary, meaning that beings are classified as one of either 'male' or 'female'. This is usually ascertained on examination of external genetalia, internal genetalia, gonads, hormonal states and secondary sexual characteristics but also chromosomal qualities, which are usually 23XX (for females) ...read more.

There is great diversity on the world wide stage, carrying different conceptions of what exactly gender is and how many gender groups people can be classified into. The most famous 'neither-male-nor-female' groups are probably the Hijra of India, Pakistan and Bangladesh. Hijra are usually considered to be members of "the third sex" and as such are neither men nor women. The majority of Hijra can be sexually classified as male or as intersex, although there are some who would be sexually classed as female. Linguistically, Hijra speak of themselves as female and they usually dress as women. The 'Berdache' of some tribes of the North American indigenous peoples are a further important example of a 'third sex'. Usually male, the Berdache adopted the dress, occupations and behavior of the opposite sex. "It was a movement toward a somewhat intermediate status that combined social attributes of males and females. The terminology for Berdaches defined them as a distinct gender status, designated by special terms rather than by the words "man" or "woman"4. Separation of sex and gender is, therefore, not consistent across cultures or often even within one society. In the examples given above, the members of the so-called 'third sex' often fill important roles in the culture and even religion of the societies to which they belong. Although there is often discrimination against these people from outsiders (and less frequently from those within the society), the perception of the people seen to be of the 'third sex' is rarely that they are 'unnatural'. ...read more.

Earlier definitions of gender in this essay cite the role of culture and society as critical, regardless of biology. Whilst it is important to entertain an extremist biological position, it has obvious flaws. Extremist positions lose their appeal as they fail to encompass the aforementioned 'shades of grey'. Nonetheless, it is important to recognize that one's sex is the bedrock on which society's perception of a person rests. If we were to examine gender in a social vacuum, it could be contended that no two people rest on exactly the same point of the gender-spectrum. One's gender could be said to be as unique as one's personality. As it is not possible to construct a social vacuum and we must conduct any examination of sex and gender in a world full of social and moral judgments and preconceptions, it is most often the case that the majority of people will try to fit themselves into one of the 'boxes' that society wants to put them in. While it is true that perceptions of gender identity and what is generally acceptable to society in the West is changing, most people still do not understand gender and sex as discrete concepts. For this reason, it can be argued that biology is important in defining gender, though only when gender is viewed through the prism of social expectations. Needless to say, every society believes that its own definition of gender corresponds to the biological duality of sex. ...read more.