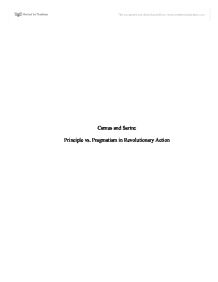 Camus and Sartre: Principle vs. Pragmatism in Revolutionary Action

Camus and Sartre: Principle vs. Pragmatism in Revolutionary Action Introduction In what has been characterized as one of the most significant intellectual clashes of the twentieth-century, it seems that what ultimately ended the personal and professional relationship between Albert Camus and Jean-Paul Sartre was a disagreement regarding what deserved a higher value: principles or pragmatics. While both thinkers devoted themselves to the interests of the oppressed, they differed significantly over what methods would be best to combat proletariat injustice. Sartre clung fiercely to the necessity of practical gain and improvement for laborers, while Camus asserted the obligation of restraint in pursuing such ends. In attempting to explain Camus-Sartre split, this analysis will examine the changing political environment both philosophers found themselves in following World War II, as well as the literature they produced as a result of that tumultuous atmosphere. After the conditions which led to their intellectual and personal divide have been established, this paper will evaluate the claims and critiques by both Camus and Sartre to determine which, if either thinker, was triumphant in his assertions. Historical Background The split between Camus and Sartre had its contextual roots in shifting political environments, both within and outside of France, following World War II. As David Sprintzen and others assert, "[t]he violent clash between Sartre and Camus cannot be disassociated from the somber atmosphere that dominated the late forties and early fifties" (Sprintzen et al. ...read more.

Reflecting on the violence of the 20th century, Camus saw this process as self-defeating and believed that "any form of revolution that places abstract ends over the concrete demands of life is itself infected with the very nihilism is proposes to overcome" (62). In essence, for Camus it seemed that the Communists and their supporters were complicit with the absurd in their pursuit of social revolution; their tactics devalued the individual and promised more than they could ultimately deliver. The initial response to Camus came from Sartre follower Francis Jeanson through a pieced titled "Albert Camus, or the Soul in Revolt" (Albert Camus ou l'�me r�volt�e) in the May 1952 edition of Sartre's journal Les temps modernes. The main thrust of Jeanson's critique revolved around the apparently transcendental attitude Camus took in characterizing the conditions of human agency. The distinction that Camus makes between true metaphysical rebellion against the conditions of life instituted by the absurd and revolutions which are a perversion of true rebellion appear all too absolutist to Jeanson: At this elevated level of thought, theological quarrels can undoubtedly appear decisive, but this is certainly not the case for the simple existence of men who, for example, may be hungry and who...might take to struggle against those responsible for their hunger. (Jeanson qtd. in Sprintzen 87). Camus addressed his response letter not to Jeanson, but "to the editor of Les temps modernes" (Sartre) ...read more.

Although Sartre may object to this point - stating that while inaction keeps the individual morally pure, it comes at the cost of collective suffering - he would be ignoring the fact that not all action has be violent. It then seems that for the moralist, Camus offers something Sartre ultimately cannot: a course of action that maintains ethical imperatives. On the whole, it is clear that despite the years since their split and eventual deaths, no conclusive evaluation regarding the intellectual separation between Camus and Sartre has yet to be made. While Sartre may have accused Camus of trying to transcend history, the centerpiece of their rift - a dispute over the value of means and ends - is a debate that existed long before their presence in history, and is sure to continue long after it as well. Although it is fair to criticize Camus' outlook as demanding, perhaps even untenable for the oppressed he and Sartre concerned themselves with, it is unfair to state that he was complicit with the crimes of capitalism. As Camus would later say about politics, "I am not made for [it] because I am incapable of wanting or accepting the death of the adversary" (70). Camus was a moralist and more importantly a thinker; his actions were not reflective of a coward or collaborator, but of an individual determined not to contribute further to the absurdity of existence. ...read more.