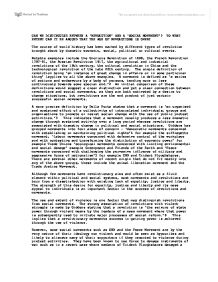 CAN WE DISTINGUISH BETWEEN A 'REVOLUTION' AND A 'SOCIAL MOVEMENT'? TO WHAT EXTENT CAN IT BE ARGUED THAT THE AGE OF REVOLUTIONS IS OVER? The course of world history has been marked by different types of revolution brought about by dramatic economic, social, political or cultural events. Notable examples include the Glorious Revolution of 1688, the French Revolution 1787-91, the Russian Revolution 1917, the agricultural and industrial revolutions of the 19th century, the cultural revolution in China and the technological revolution of the late 20th century. The simple definition of revolution being 'an instance of great change in affairs or in some particular thing' 1applies to all the above examples. A movement is defined as 'a series of actions and endeavours by a body of persons, tending more or less continuously towards some special end.'2 An initial comparison of these definitions would suggest a clear distinction and yet a clear connection between revolutions and social movements, as they are both motivated by a desire to change situations, but revolutions are the end product of just certain successful social movements. A more precise definition by Della Porta states that a movement is 'an organised and sustained effort of a collectivity of interrelated individuals, groups and organisations to promote or resist social change with the use of public protest activities.'3 This indicates that a movement usually produces a less dramatic change through sustained activity over a long period whereas revolutions are associated with dramatic change in political and social situations. Giddens has grouped movements into four areas of concern - 'democratic movements concerned with establishing or maintaining political rights'4 for example the suffragette movement, 'labour movements concerned with defensive control of the workplace and with contesting and transforming the distribution of economic power' for example Trade Unions 'ecological movements concerned with limiting environmental and social damage' example Greenpeace and Friends of the Earth and 'Peace movements concerned with challenging the pervasive influence of military and aggressive forms of nationalism'5 for example CND and Trident Ploughshares. ...read more.

The original 17th century meaning was that revolutions are part of a cyclical phenomena returning to a previous position through a revolving movement - as astrologists would understand the term. The 'eco-pax' movements which include CND, Friends of the Earth and some anti-capitalist groups are campaigning against and fighting for a reversal in some instances of the aspects of modernity which threaten man and his natural environment. It could be argued that these social movements are quite different from those in the past such as the suffragettes, as these 'eco-pax' movements are a reaction against the harmful outcomes of the industrial and technological revolutions. They seek to resist and abolish some of the harmful changes that these revolutions have produced. An interesting social movement which has grown and become very active during the last year is the Countryside Alliance. They have organised huge protest marches in London and campaigned widely using the emotive slogan 'liberty and livelihood' - a little reminiscent of the Bolshevik slogan 'bread, land and peace.' Sidney Tarrow defined a social movement as 'a form of political activity by the non-powerful, the non-wealthy and the non-famous.'12 The Countryside Alliance does not conform to Tarrow's definition as it does have quite a few wealthy land-owning supporters who are campaigning against the ban on hunting. Other supporters of the Countryside Alliance such as farmers have some issues in common with those in past revolutionary situations - the losses of livelihood, control and freedom as they are now controlled by the EEC and powerful supermarkets. A key difference between revolutions and social movements is that most social movements operate through a sustained effort to promote or resist social change using public protest activities whereas revolutions radically change both the political and social structures - they are seen as interdependent. 'Revolutions have often been a way of creating the preconditions for social change.'13 It does seem reasonable to regard the age of revolutions as being over in the developed world and it is now through the growing number of social movements that beneficial change is more likely to be achieved using non violent means. ...read more.

I believe that the revolutionary struggle is appropriate for the Christian and the priest. Only by revolution, by changing the concrete conditions of our country, can we enable men to practise love for each other.'25 One of the few strong nationalist organisations which operates in a revolutionary manner is the Irish Republican Army (I.R.A.), located in a part of the developed world where religion plays a large part. It remains a revolutionary movement, despite its use of violence it has not been powerful enough to achieve a revolution. The equality of gender that now exists in Western society ia anothet factor making revolutions more unlikely as they were almost exclusively organised and dominated by men. The strong influence of women over men may serve to prevent the occurrence of revolutions. More women seek change through peaceful means and they have considerable involvement and power in the many large social movements. In conclusion it can be seen that there are some ways in which the praxis of revolutions and social movements differ, such as the degree of violence used and the participation and dedication of the members. Although revolutions are borne from social movements, very few social movements engender a revolution. The majority of social movements are of the type that do not have revolutionary intentions but aim to change specific aspects of society. It is these which now have a far greater chance of success than those with revolutionary aims. The classic type of revolution can be considered over in the West where security is tight, peoples' basic needs are satisfied, international links are strong and where there is no cause yet great enough to unite sufficient numbers of people. Revolutionary movements do however, have the potential to succeed in the developing world where hunger, mass poverty, religious fundamentalism and lack of democracy are able to fuel a revolutionary outcome. A more sophisticated, non-violent revolution, does however, seem possible engendered by a strong coalition of social movements opposed to the globalisation of capitalism. ...read more.