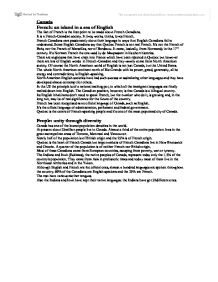 Canada French: an island in a sea of English.

Canada French: an island in a sea of English The fact of French is the first point to be made about French Canadians. It is a French-Canadian society. It lives, works, thinks, loves French. French Canadians care passionately about their language in ways that English Canadians fail to understand. Some English Canadians say that Quebec French is not real French. It's not the French of Paris, nor the French of Marseilles, nor of Bordeaux. It came, basically, from Normandy in the 17th century. It's Norman French the one used by de Maupassant in his short histories. ...read more.

In the US the principle is of a national melting pot, in which all the immigrant languages are finally melted down into English. The Canadian position, however, is that Canada is a bilingual country. Its English inhabitants don't need to speak French, but the number who do it, is growing and, in the long run, may be of real significance for the future of the country. French has been recognised as an official language of Canada, such as English. It's the official language of administration, parliament and federal government. Quebec is the centre of French-speaking people and it's one of the most populated city of Canada. ...read more.

A quarter of the population is of neither French nor British origin. Most of these Canadians came from European countries, escaping from poverty, war or tyranny. The Indians and Inuit (Eskimos), the native peoples of Canada, represent today only the 1.5% of the country's population. They came from Asia in prehistoric times and today most of them live in the Northwest territories and in the Yukon. Although English and French are the official ones, almost a hundred languages are spoken throughout the country. 60% of the Canadians are English speakers and the 25% are French. The rest have various mother tongues. Also the Indians and Inuit have kept their native languages: the Indians have got 52different ones. ...read more.