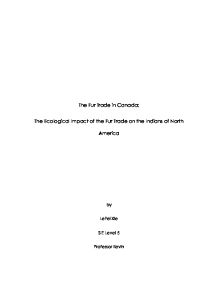 By 1831 the beaver was extinct on the northern Great Plains and two years later the Hudson's Bay Company issued instructions not to waste time hunting in certain areas because the beaver was so rare"(Ponting 158). Besides, the fur trade in French New France, as the pivot of economy, also slaughtered a large variety of fur-bearing animals. "In one year (1734) La Rochelle, one of the centres of trade with Canada, Xie 3 imported skins from 127,000 beavers, 30,000 martens, 12,000 otters, 110,000 racoons and 16,000 bears (158). Also, "similar figures were common at the other French and British ports trading with North America" (158). Obviously, unrestrained competition in the fur trade drove the number of fur-bearing animals to the point of extinction. Before the White settled down, plentiful animal resources had been a vital source of food to the Indians. The fur-bearing animals killed cut off the food supply to the Indians however, and therefore, it led to the poverty of the Indians as well as aggravated their dependence on the White. Furthermore, while the animals were gradually extinguishing, the fur trade was changing the Indian ecological ethics. The Indians had lived in their lifestyle in North America for thousands of years. They had to follow a series of strict procedures to kill the animal they hunted. According to Alexander Henry's description, after killing a beaver, the Ojibwa believed all the animals were his relatives. ...read more.

At the same time, the fur trade changed both the Indian social life and their culture. On one hand, the fur trade brought about the White's commodities and Western culture to the Indian. On the other hand, two points of view existed among the Indian. Part of Indian wanted their traditional lifestyle back, while the other part promoted the White's culture and put modernism into practice. Second, the fur frontier, the same as the fishing frontier and the agriculture frontier, was a kind of staple economy in North America. Those economic modes usually depended on exploring one or several sources which would be supplied exportation. Therefore, at that time, beavers, foxes, white-tailed deer and other fur-bearing animals were over hunted for the fur Xie 5 exploring. Although the fur trade increased the economic development, it destroyed the North American environment by leading several animals to be essentially extinct. Third, the fur trade changed the Indian living conditions and ecological ethics. Some contemporary academics believed that the fur trade did not collapse the native culture, and the Indians were not the victims in the fur trade, but the participants (Krech 81-82). Nevertheless, look back the Indian living from the 16th century to the 19th century, we can easily find that the Indian traditional ethics and social order were seriously destroyed by the White; also, the Indian suffered from different diseases and being addicted to alcohol brought by the White. Obviously, the Indian was the victim in the North American fur trade. ...read more.