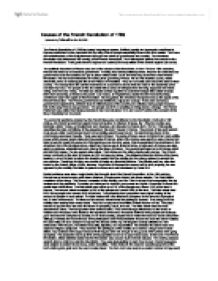 causes of the french revolution

France had been at war for nearly 50 years out of the previous one hundred years. France supported the Americans in the American War of the Independence. After that, France was in financial ruins. A large sum of money was also spent on palaces, entertainment and gifts by the kings of France. The government spent a lot of money which put forth high taxes. The tax system was unjust. The nobles and the clergy hardly paid any tax. The Church owned one-tenth of the land in France and did not pay any taxes. The peasants were the victims of the heavy taxation. Louis XVI tried to reform the taxation system but the nobility and the clergy refused to accept the new reforms. Therefore, the king was unable to make any financial reforms. The gabelle, salt tax, was also levied by the French Kings. When Jacques Turgot tried to impose the corvee, tax on land property, he was opposed by the nobility. He failed to pass the corvee and was dismissed by Louis XVI.. Social problems were also a major factor that brought about the French Revolution. ...read more.

City workers were angry because their wages were not enough to buy goods when prices were going up rapidly. The peasants made up 80% of the population and had to pay heavy taxes. In his book The French Revolution, Albert Mathiez states that the Revolution was caused by the middle classes. The working classes weren't able to control or start the Revolution. They were just starting to learn how to read. French peasants were subject to certain feudal dues, called banalities. These included the required used-for-payment of the lord's mill to grind grain and his oven to bake bread. The lord could also require a certain number of days each year of the peasant's labor. Peasants were targeted by society. They couldn't do anything on there own or try to fight back. The French Revolution was caused by social, political and economic problems. People were in discontent with the king. The first two estates were privileged and the third was very unprivileged and had to pay heavy taxes. The third estate did not get along with the first two. French kings spent a lot of money on wars. They spent more money then they made. It was time for a change in France. ...read more.