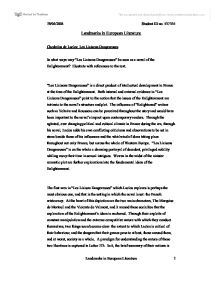 It is this relationship between the Valmont and Merteuil that forms the cornerstone to the machinations of Valmont and Merteuil "Les Liaisons Dangereuses". Despite the apparent lack of empathy for their victims, Laclos introduces in Letter 21 sentiment to Valmont's range of emotions. This device ties in with the Enlightenment as one of the fundamental characteristics was to observe situations and evaluate them based on logic with sentiment. Although Valmont throughout the novel remains unsympathetic to the feeling around him, it is worth discussing the emotions he claims to feel as he helps the peasants he tells Merteuil about in the letter, "You cannot imagine the shower of blessing this simple little action brought down upon me...tears of gratitude...My eyes were moist with tears and I felt within me an unwonted but delicious emotion. I was astonished at the pleasure to be derived from doing good and I now tempted to think that what we call virtuous people have less claim to merit than we are led to believe". The sentiment that he experiences is not the only emotion that has implications on the novel's meaning, for there is considerable evidence to suggest that Merteuil is in fact in love with Valmont, but she never openly communicates this too him. ...read more.

The influence of other contemporary writers writing on feminism at the time also supports "Les Liaisons Dangereuses" as a novel of the Enlightenment in that these influences are included in many of the letters, particularly that of Rousseau's "La Nouvelle Heloise". Added to this, the fact that Laclos asked his wife to re-read Voltaire's works on feminism gives clear indication that Rousseau is admired by Laclos because Laclos' statement that his writing had a moral purpose to society implies "Rousseauist" thinking. It signals his intentions towards virtue and goodwill and as a side note, supports what would later become the French Revolution. Traditional values such as religion, the decadence of the aristocratic French nobility, and the non-absolutist ideals of the philosophes all have their place in Laclos' literary work "Les Liaisons Dangereuses" and are explored on several different levels throughout the plot. Furthermore, more humanistic issues such as the implementation of logic to manipulate others for one's own benefit, with the impact of sentiment and emotion are also depicted and conveyed in such a way that provokes both modern and contemporary readers into considering the importance of reason, sensibility and energy, and how best to channel them. There can be no doubt at all that Laclos's "Les Liaisons Dangereuses" can be viewed as a novel of the Enlightenment in many different aspects. ...read more.