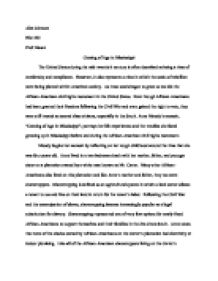 Alex Johnson Hist 202 Prof. Hesen Coming of Age in Mississippi The United States during the mid-twentieth century is often described as being a time of conformity and compliance. However, it also represents a time in which the seeds of rebellion were being planted within American society. As these seeds began to grow so too did the African-American civil rights movement in the United States. Even though African-Americans had been granted their freedom following the Civil War and even gained the right to vote, they were still treated as second class citizens, especially in the South. Anne Moody's memoir, "Coming of Age in Mississippi", portrays her life experiences and the troubles she faced growing up in Mississippi before and during the African-American civil rights movement. Moody begins her memoir by reflecting on her rough childhood around the time that she was four years old. Anne lived in a two bedroom shack with her mother, father, and younger sister on a plantation owned by a white man known as Mr. Carter. ...read more.

Despite the hardships she faced during her childhood, Anne is not discouraged. As an African-American child growing up in the South, Anne is clueless to why white people are seen as superior to African-Americans and eventually realizes that there is no good reason. In part two of her memoir, Anne is entering high school and first learns of the death of Emmitt Till. Emmitt Till was a fourteen year old African-American boy from Chicago who was visiting Mississippi. The boy allegedly whistled at a white woman and was lynched because of it. The news of this infuriates Anne and sparks her political awakening. "Before Emmett Till's murder, I had known the fear of hunger, hell, and the Devil. But now there was a new fear known to me - the fear of being killed just because I was black." (132) For the first time in her life, Anne becomes fully aware of the racial and unjust world that she lives in. She begins to feel hatred towards white people and hates the fact that most African-Americans seem helpless in challenging the status quo. ...read more.

What Anne said bothered her the most was the fact that when they left the sit in, about ninety or so policeman were outside watching the chaos through the windows without ever intervening. This experience helps Anne to understand how sick Mississippi whites are. "They believed so much in the segregated Southern way of life, they would kill to preserve it." (292). Despite the hardship that she faces, Anne is still determined to make a difference in the fight for civil rights. However, she is skeptical about whether or not African-Americans will ever overcome racial prejudice in the country. Her memoir ends with the statement, "I WONDER, I really WONDER." (424). I thought that this book was an enjoyable read. It was interesting to read an account of someone who had experienced the hardships of growing up as an African-American in the South during this time in American history. I also enjoyed her narration of the famous sit-in at Woolworth's counter in Jackson Mississippi. This sit-in had been mentioned in some of my previous history classes, but this was the first time that I had a chance to read a first-hand account of what actually happened. ...read more.