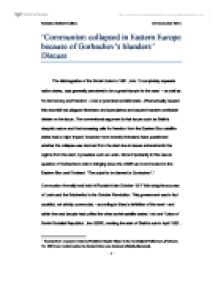 Communism collapsed in Eastern Europe because of Gorbachev

'Communism collapsed in Eastern Europe because of Gorbachev's blunders.' Discuss The disintegration of the Soviet Union in 1991, into 15 completely separate nation states, was generally perceived to be a great triumph for the west - as well as for democracy and freedom - over a tyrannical socialist state. What actually caused this downfall has plagued historians and speculators and caused massive worldwide debate on the issue. The conventional argument is that issues such as Stalin's despotic nature and the increasing calls for freedom from the Eastern Bloc satellite states had a major impact; however more recently historians have questioned whether the collapse was doomed from the start due to issues entrenched in the regime from the start, by leaders such as Lenin. More importantly in this case is question of Gorbachev's role in bringing down the USSR and communism in the Eastern Bloc and if indeed: "The culprit to be blamed is Gorbachev".1 Communism formally took hold of Russia in late October 1917 following the success of Lenin and the Bolsheviks in the October Revolution. This government was in fact socialist, not strictly communist, - according to Marx's definition of the word - and within the next decade had unified the other soviet satellite states into one "Union of Soviet Socialist Republics', the USSR, marking the start of Stalin's rule in April 1922. ...read more.

The road to serious collapse can be seen from 1982 onwards when opposition towards Gorbachev was not simply made up of the "elderly little Stalins4," who led the satellite states, but as Mazower continues included most people: "The collapse of belief in socialist ideology, and the abandonment by the early 1980s of any convincing hope of surpassing the West economically, left the party with little general purpose. It was degenerating into a privileged nomenklatura, and a decreasingly effective instrument of crisis management."5 Gorbachev was, it would seem, doomed from the onset: he had had radicals such as Yeltsin clamouring for more drastic changes while old conservatives such as Ligachev felt he had gone too far already and the party would soon spiral out of control. His failed reforms and liberal approach towards Stalinism and the Soviet Union effectively caused communist opposition to climax and the Soviet Union to collapse from within the empire itself. Furthermore the Soviet Union could no longer afford the economic and political strain of the Eastern Bloc and the charade of keeping up appearances to the West - pre and post- cold-war d�tente. This collapse seems to draw parallels from Tsarist rule, under Nicholas II, which had managed to maintain flourishing communism nearly a century before. ...read more.

Soviet Union in order to modernise the state and compete with the West - the failures led to disillusionment within the population, the party elite and the Eastern Bloc states. Satellite states that in the past would never have dared think of breaking away from Moscow's iron rule were beginning to think seriously about managing their own affairs better than Moscow could and became more open in their demands of freedom from oppressive communist governance. By 1989 The Communist cause had been exhausted and the Soviet Union had become a failure; Gorbachev had undermined the CPSU's confidence and sapped and revolutions began to break-out all over Eastern Europe (most of these involved ousting the communist leaders and creating republics.) Gorbachev's leadership was arguably too weak, and Gorbachev's role as a reform communist is seems had a detrimental effect on the strength of socialist rule in the Eastern Bloc and even accelerated the disintegration empire, which although, seemingly inevitable, may not have occurred so soon had it been someone else. But it is worth taking into consideration that this type of regime cannot last forever and it seems more pragmatic to state that his reforms were merely the catalyst for communisms failure, as years of stifled hostility and frustration to the communist regime were finally given an outlet. ...read more.