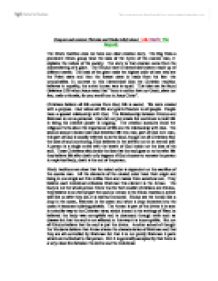 Compare and contrast Christian and Hindu beliefs about: Life; Death; The Beyond.

Compare and contrast Christian and Hindu beliefs about: Life; Death; The Beyond. The Hindu tradition does not have one clear creation story. The Rig Veda a prominent Hindu group have the idea of the hymn of the cosmic man, it explains the values of the society. The story is that creation came from the dismembering of a giant. The Hindus have a hierarchical system made up of different castes. The head of the giant made the highest order of man who are the Priest caste and then the lowest caste is made from the feet -the untouchables. In contrast to this hierarchical idea the Christian tradition believes in equality, the entire human race is equal. This idea can be found Galatians 3:28 when Jesus stated that "there is neither Jew nor Greek, slave nor free, male or female, for you are all one in Jesus Christ". Christians believe all life comes from God; life is sacred. We were created with a purpose. God values all life and grants freedom to all people. People have a special relationship with God. The Relationship between Hindus and Brahman is not so personal. God did not just create but continues to hold life in being his creative power is ongoing. ...read more.

But it is generally accepted by that there is a very close link between the divine and the individual. The Hindus see life as a burden and this emersion with Brahman happens eventually. Hindus believe in the idea of rebirth (reincarnation) they are trapped in the law of samara, the law that controls rebirth. The Atman moves on in stages up the levels of caste, starting at the lowest level and moving up to the priest caste until the union with Brahman. When a man or woman dies the soul is reborn into a new life. The decision as to whether you go up or down the hierarchical system is dependant upon your Karma. Karma is connected in a way to the Atman it weighs it down. Disobedient acts weigh it down and worthy ones lighten it. Good people are lighter and move up through the caste, the law of Samsara is sometimes seen as a ladder. This process of rebirth repeats until the Hindu is good enough to stop being reborn and become part of Brahman. These ideas show a value to life for Hindus, life is important as it dictates the weight of your Karma and the Hindus incentive is to reach Moksha (union with the divine). ...read more.

These ideas about life after death show that life as with the Hindu tradition has value. God gave life a purpose; Gods thought that humans were worth saving. God sent the prophets and they failed to redeem the people so he sent Jesus who died to save man and then the Paraclete to live in people forever. He did not leave man to live isolated on the earth he was an active part of creation. The two theodicies from Augustine and Irenaeus also show purpose. The Augustinian theodicy claims life is soul-deciding what you do on earth affects the after life. Irenaeus claims life is soul-making the union with god is quicker if life on earth is good and the person becomes closer to God while still living on earth. It is an opportunity to do Gods will as shown in the 2 great commandments, which are to love god and to love your neighbour. The passage found in the gospel of Matthew, claims that not even a sparrow dies without Gods knowledge, he even knows the number of hairs on your head. God also still speaks to people through religious experiences and the Roman Catholics believe that God speaks through the Pope in the Ex Cathedra pronouncements. If people are not important and earthly life is unimportant why odes the Father choose to make huge sacrifices to help mankind. ...read more.