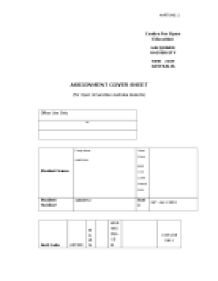 Compare and contrast the European-indigenous encounter in Australia with that of New Zealand. In what ways can these encounters be considered wars?

﻿HARTUNG: Centre for Open Education MACQUARIE UNIVERSITY NSW 2109 AUSTRALIA ASSIGNMENT COVER SHEET (For Open Universities Australia students) Office Use Only ** Student Name Family Name HARTUNG Given Name MARCUS JOHN FREDERICK Student Number 42505712 Date 24th JULY 2012 Unit Code HST220 Unit Name WAR AND PEACE IN WORLD HISTORY COE USE ONLY Date Received Assignment No. 2 Assignment Title RESEARCH ESSAY Due Date 27TH JULY 2012 Contact Info Phone:0409355686 Email:Marcus.hartung@students.mq.edu.au Word Count (If Applicable) 2500 Turnitin No. (If Applicable) N/A ACADEMIC HONESTY DECLARATION (this is very important please read carefully): By placing my name in this document I declare that: This assessment is my own work, based on my personal study and/or research; I have acknowledged all material and sources used in the preparation of this assessment, including any material generated in the course of my employment; If this assessment was based on collaborative preparatory work, as approved by the teachers of the unit, I have not submitted substantially the same final version of any material as another student; Neither the assessment, nor substantial parts of it, have been previously submitted for assessment in this or any other institution; I have not copied in part, or in whole, or otherwise plagiarised the work of other students; I have read and I understand the criteria used for assessment; The assessment is within the word and page limits specified in the unit outline; The use of any material in this assessment does not infringe the intellectual property / copyright of a third party; I understand that this assessment may undergo electronic detection for plagiarism, and a copy of the assessment may be retained in a database and used to make comparisons with other assessments in future. ...read more.

initial intent; the British with their concept of imperial destiny colliding with both the shy, peaceful Australian Aborigine and the bold, warlike Maori. It is no small part due to the Maori?s readiness for war and their success in early skirmishes, that for over half a century from first contact, the British were merely tolerated in New Zealand.[12] This toleration or sufferance however, warmed to the point of Maori enthusiasm for settlement, as extremely complimentary trade and even intermarriage, a situation never equaled in Australia, improved interaction.[13] Unlike other new world encounters, smallpox hardly impacted upon the New Zealand indigenes, and in fact, the introduction of pigs and potatoes stabilised and in later years, increased their population.[14]Maori hunting prowess provided the colonists with seal fur as well as whale bone and oil and for this they would often receive muskets, again, a unique situation contrasting the Australian encounter.[15] Such was the intensity of New Zealand?s inter-tribal rivalries, that the procurement of guns became the sole intent of many warring factions and this led to an internal crisis of tribal hierarchy that by 1831 had caused up to 40, 000 Maori deaths.[16] Largely unconcerned despite the Enlightenment tenets of nurturing savages into a civilised state, the British declared sovereignty over New Zealand and its inhabitants in 1840. This event was reciprocated with an equal lack of concern by the majority of the Maori population.[17] At this stage, with predominance in numbers, most Maoris believed that they could still control their slowly shifting relationship with the colonists, and it was only those few who had traveled to Britain, experiencing its power and sophistication, that realised a certain futile inevitability.[18] Similarities with the Australian encounter are illustrated with the steady progression towards open conflict arising from an influx of colonists and the subsequent land acquisitions needed to accommodate them. ...read more.

Contrasting perceptions of the Maori as ?cultivators with a fixed abode? was this portrait of the roaming Aborigine as a ?hunter and gatherer? who held no physical possession of the land and could therefore be ?driven beyond the frontiers?.[38] Divergent with the New Zealand encounter then, the British-Aboriginal colonial relationship can best be understood as being the product of a misrepresentative identity construction, a construction devoid of human respect, and explained through these three proposed causal reasons. Comparison between the two encounters now briefly returns to that of similarity as open conflict became the common denominator in both experiences, although definitions of these hostilities are again markedly different. There are many debates on the nature of conflict that was experienced in these regions during the colonial period and whether they can in fact be considered wars. Vital to historical record is this designation of nomenclature, as it offers a legitimisation that for its combatants can mean the difference between them being viewed as criminals, as Windschuttle proposes in regards to the Aborigine, or as valiant defenders of their country. Windschuttle is in no doubt that whatever hostilities were engaged in throughout the Australian encounter, ?it did not amount to warfare in any plausible meaning of the term.?[39] He rationalises this verdict through reports exposing a ?lack of either political or military organisation? within Aboriginal society, and the resulting inability to negotiate for a peaceful settlement.[40] This argument, the Aboriginal?s supposed avoidance of confrontation with colonial soldiers and the aforementioned tit for tat retaliatory conflicts arising from convict brutalities appear to confirm Windschuttle?s position, a position hotly disputed by historian Henry Reynolds.[41] Directly contradicting Windschuttle?s view, Reynolds consistently and persuasively proposes the notion of the ?Black War? during the 1820s and 1830s as a legitimate war and the Aboriginal people as a nation defending their country. ...read more.