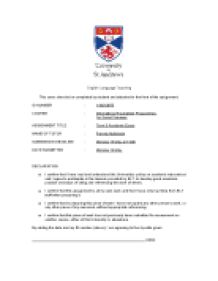 ﻿English Language Teaching This cover sheet to be completed by student and attached to the front of the assignment. ID NUMBER : 110013975 COURSE : International Foundation Programmes for Social Sciences ASSIGNMENT TITLE : Term 3 Academic Essay NAME OF TUTOR : Pamela Mclldowie SUBMISSION DEADLINE : Monday 14 May at 14.00 DATE SUBMITTED : Monday 14 May DECLARATION 1. I confirm that I have read and understood the University?s policy on academic misconduct and I agree to participate in the lessons provided by ELT to develop good academic practice and ways of citing and referencing the work of others. 1. I confirm that this assignment is all my own work and that I have only had help from ELT staff when preparing it. 1. I confirm that in preparing this piece of work I have not copied any other person?s work, or any other piece of my own work, without appropriate referencing. 1. I confirm that this piece of work has not previously been submitted for assessment on another course, either at this University or elsewhere. By adding the date and my ID number (above), I am agreeing to the 4 points given. _________________________________________________________ (date) ?Justice removed, then, what are kingdoms but great bands of robbers? What are bands of robbers themselves but little kingdoms??(Augustine). ?The first man who, having enclosed a piece of land, thought of saying ?This is mine? and found people simple enough to believe him, was the true founder of civil society.? (Rousseau). ...read more.

It could be seen that Augustine and Rousseau philosophised human nature from opposite premises, which consequently results in disparate approaches to justify the legitimacy. It can be assumed that since St Augustine and Rousseau derived the legitimacy from different existences, therefore they adopted opposite approaches of realising a legitimate government and a just society. In Augustine?s perspective, justice is the virtue accords to each one?s due, however true justice would never be achieved in Earthly cities for their original sins and disbelief (Ellingsen, 2005). For this reason, he advocated that it is the God-given love that orientates a government, whose functions are stabilising social orders, repressing conflicts and mitigating social turbulence. As he reiterated, a conservative approach of legitimising society should be taken, people should obey their superiors regardless of forms of government. This assertion appears to be coherent with his constant Christian advocacy that humanity could only achieve happiness and justice after death, following that, it can be suggested that all forms of government are legitimate, for justice has already been removed (Morrow, 1998). On the other side, although Rousseau did not explicitly define justice, yet he acknowledged that justice emanates from God. However unlike Augustine, Rousseau?s elaboration of legitimacy stresses upon the positive reconciliation of individual?s rights and general wills. He therefore first declined two possibilities of legitimacy, namely the physical enforcement and innate sociability (Grimsley, 1973), this demonstrates that reluctant enslavement and presupposed morality are not the answer as referred in the quote. ...read more.

In conclusion, St Augustine and Rousseau philosophised the society from disparate prerequisites, resulting in different political ideologies and historical influences. By comparison, St Augustine appears to be relatively conservative whereas Rousseau is more progressive, for the reason that the former dedicated his passion to self redemption and the posthumous life while the latter advocated for repossessing freedom and equality. It could be the case that due to their underlying differences, Rousseau?s theory is more applicable in the modern society, for instance, China. In essence, they are both great philosophers since their ideas arose from unstable social backgrounds; with regard to respective circumstances, they both have contributed to historical progress. Word count: 2163 1. Bonner, G., (2007). Freedom and necessity: St Augustine?s teaching on divine power and human freedom. Washinton, D.C.: The Catholic University of America Press. 2. Dent, N.J.H., (2005). Rousseau. Cornwall: Routledge. 3. Dent, N.J.H., (1992). A Rousseau Dictionary. Oxford: Blackwell Publishers. 4. Ellingsen, M., (2005). The Richness of Augustine: His Contextual and Pastoral Theology. Louisville: Westminster John Knox Press. 5. Garrett, J., (2002). Augustine on Human Nature. [online] Available at:< http://www.wku.edu/~jan.garrett/august.htm> [Accessed 10 May 2012]. 6. Gourevitch, V., ed., (2004). The Social Contract and other later political writings. 4th ed. Cambridge: Cambridge University Press. 1. Grimsley, R., (1973). The Philosophy of Rousseau. Bungay: Oxford University Press. 2. Masters, R. D., ed., (1964). The First and Second Discourses. New York: St Martin?s Press. 3. Mommsen, T. E., (1951). St. Augustine and the Christian Idea of Progress: The Background of the City of God. Journal of the History of Ideas, 12(3), pp.346-374. 4. Morrow, J., (1998).History of Political Thought: A Thematic Introduction. London: Macmillan Press. ...read more.