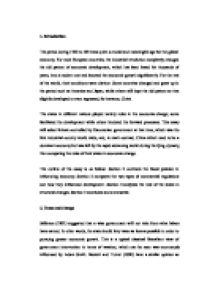 Comparing economic change in Britain and China from 1760 to 1914

1. Introduction The period during 1760 to 1914 was quite a crucial and meaningful age for the global economy. For most European countries, the industrial revolution completely changed the old pattern of economic development, which has been lasted for thousands of years, into a modern one and boosted the economic growth significantly. For the rest of the world, their conditions were distinct. Some countries changed and grew up in the period such as America and Japan, while others still kept the old pattern so that slightly developed or even regressed, for instance, China. The states in different nations played variety roles in the economic change; some facilitated the development while others hindered the forward processes. This essay will select Britain controlled by Hanoverian government at that time, which was the first industrial country world wide, and, in stark contrast, China which used to be a dominant economy but was left by the rapid advancing world during the Qing dynasty, then comparing the roles of their states in economic change. The outline of the essay is as follow: Section 2 contrasts the fiscal policies in influencing economy. Section 3 compares the two tapes of commercial regulations and how they influenced development. Section 4 analyzes the role of the states in structural changes. ...read more.

However, it urged the changing process by encouraging people to find jobs in innovative sectors and forced them to export without intending. By contrast, although the central revenue as a percentage of national income in China was low, there was no incentive in innovation and people was exploited by local government and could not export, they could only continue the old pattern. Thus, the Chinese state actually hampered the economic change by taxation whereas British facilitated the change. 3. Commercial regulation and change The Hanoverian government's action in terms of commerce was quite successful; they made great efforts in boosting business development. Cottrell (1980) mentioned that partnership was allowed in starting or expanding business, and firms were allowed to "raise capital through the sale of stocks and shares." By these direct regulating methods, running a business became easier to start and expand than ever before. Apart from these, some indirect regulations has also been taken. Lambert (1971) claimed that the state had assisted in the developing tremendously by "repealing restrictive statutes or by encouraging the courts to neglect the enforcement of those areas of the common law which had hindered private exchanges and initiatives." Furthermore, Stearns (1975) indicated that those "local tolls and other barriers" were cut down. ...read more.

Therefore, a large number of labours in agriculture were still needed to supply food for the overall population. To conclude, British state played an active role in structural change by providing well-defined property right for labours, publishing wise acts and supporting the use of machines, while Chinese state contributed little because of under the restriction of traditional ideology and lack of machinery supports. 5. Conclusion In general, this essay compared and contrasted the role of British and Chinese state in economic change between 1760 and 1914 mainly focusing on taxes policies, commercial regulation, and effect of states in structural change. British state mostly accelerated and facilitated the process of economic change by low taxes in innovative sectors and encouraged international trade by high taxation, although without intention; informed direct and indirect commercial regulation as well as opening trade; wise acts and actions in structural change. Whereas, Chinese state mostly hindered the transform of economy by no incentive for innovative sectors provided by taxation and corruptions in local government; restricting commercial gatherings as well as barrier to trade; little effect in structural change. As a result, British economy developed rapidly in the period and became the center of the world while China still kept the pre-modern mode, weak in economy and power. Accordingly, it was invaded and experienced great social and political upheaval in 20th century. ...read more.