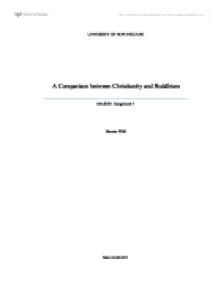 Comparison between Christianity and Buddhism

UNIVERSITY OF NEW ENGLAND A Comparison between Christianity and Buddhism RELS181: Assignment 3 Words: 2200 Religion has always played a fundamental role in human society. Throughout the course of history, religion has been a part of human experience. It binds a nation, community or group of individuals together. Through the past some controversies regarding religion and cultural communication among people have emerged. These nowadays results in religious conflicts that show the detrimental influences of cultural globalisation. It is generally acknowledged that Buddhism and Christianity are ancient and world religions; however, whether the belief in Buddhism is credible or not, has sparked spirited debate. Some Christians believe the Buddha is a "shadow", and he is not to be believed. However, there are some similarities in terms of histories, main figures, and beliefs between Buddhism and Christianity and in order to solve sources of conflict, the Buddhists and the Christians should understand the parallels between both religions and respect each other's beliefs. All religions have in one form or another a leader, an organisation that claims to have the monopoly of the truth, but on the other hand, there are always those who do not believe in those truths and "it is these people who become seekers, who form and join new religious movements." ...read more.

Buddha noticed that people are born and die depending on their actions, also called "Karma" - deeds, works, the principle of inexorable cause and effect. (Noss, Grangaard 2008:149) Although since Buddha's death, several different forms of Buddhism have been created; today the most common ones are "Theravada" or "Teachings of the Elders" and "Mahayana" or "Great Vehicle". Today, roughly 62 % of Buddhists are adherents of the Mahayana and 38 % are Theravada followers. (Esposito et al. 2009:392) Even though those two are different sects, they both agree on the same fundamental principles. These principles are called "The four noble truths". They represent the fundamental teachings of the Buddha and form the essential foundation of the system of Buddhist beliefs. They reflect an analysis of the human condition and show the way to attain ultimate liberation from that condition. (Pratt 1993:210) The first noble truth is the truth of "Dukkha", Dukkha in English means "suffering" or "sorrow". The Second Noble Truth is the truth of "Tanha" - "the grasping, desiring, thirsting, self-seeking wish-to-fulfilment that predominates human existence." (Pratt 1993:210) It relates to our endless craving for what is enjoyable in things we taste, smell, hear, think, touch and see. ...read more.

(Crotty 1999:55) Moreover, it is evident that the Catholic Church is involved in a variety of discussions and issues in contemporary society. It is pro-active in discussing a number of issues including refugees, cloning, consumerism, gambling, abortion etc. Buddhist involvement in these issues is less evident, as they believe it is more important to concentrate their energies on developing qualities that will assist in achieving "Nirvana". Bearing all those mentioned aspects in mind, it can certainly be said that Buddhism and Christianity are very different yet significantly similar. Through the comparison the distinct doctrinal outlooks of the religions became clearly apparent; however, the central teachings about spirituality remain the same. Both religions have a very similar underlying message and it seems as if people all over the world long for someone or something to believe in and entrust their faith in which helps them live a comfortable life. When considering all the religious conflict in nowadays societies one should bear in mind that the idea of a higher being and being saved when we pass is definitely a prevalent aspect of everyone's lives. Both religions, Christianity as well as Buddhism, have developed through centuries, from their early origins into religions with both traditional and contemporary elements that continue to have much influence on today's modern society. ...read more.