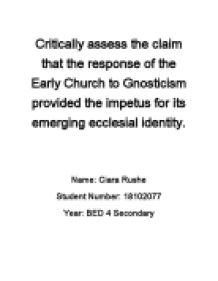 Critically assess the claim that the response of the Early Church to Gnosticism provided the impetus for its emerging ecclesial identity.

﻿Critically assess the claim that the response of the Early Church to Gnosticism provided the impetus for its emerging ecclesial identity. Name: Ciara Rushe Student Number: 18102077 Year: BED 4 Secondary John Burke (2009, p.93) states that ?Gnosticism is the first heresy of any importance that arose in the Christian Church?. Christianity was emerging from Judaism and the Church?s encounter with Gnosticism challenged the Church to explain its own teachings and beliefs from that of Judaism. Gnosticism comes from the word ?gnosis? meaning to know, due its essential teaching which was that one becomes free of the body?s confinement and returns to the supreme God only through secret knowledge. This knowledge is reveled only to a select few by messages from the supreme God. They believed that they were saved and were an elect group. There is no definitive term to describe Gnosticism, Karen L. King (2005, p.2) states that the reason for this is that ?a rhetorical term has been confused with a historical entity. There was and is no such thing as Gnosticism, if we mean by that some kind of ancient religious entity with a single origin and a distinct set of characteristics.? James Lindsay (1903) states that ?We need not, like Irenaeus, regard it as something only evil, for it not only proved a half-way house for some on the road to Christianity, but compelled to a Christian philosophy of religion?. ...read more.

Baus (1980, p.190) states ?The strict organization of his establishment distinguished Marcion?s community from other Gnostic groups and gave it a special impetus which made it a serious danger to the Church.? John Wand (1943, p.51) states that ?The importance of Marcion may be judged from the fact that he was attacked by most of the Fathers, including Justin, Irenaeus, Tertullian, Hippolytus and Epiphanius.? According to Boer (1976, p.61) ?Marcion?s entire teaching was based on the Old and the New Testaments. Of these two Testaments, however, he had a peculiar view, which arose from his view of God?. He rejected the Old Testament as the Law and Prophets which they spoke of were inspired by the inferior God. Boer (1976, p.61) goes on to state ?For Marcion the New Testament does not present a pure teaching about Christ. There are too many Jewish ideas and influences in it. Therefore he made his own New Testament Cannon.? His New Testament Cannon consisted of Luke?s Gospel and the epistles of Paul, he choose these books to distinguish between the inferior God who created the world and gave the law and the God who is Father of Jesus Christ. According to Boer (1976, p.62) ?These two God?s are completely separated in Marcion?s teaching, and they are at no point related to each other. ...read more.

This Cannon of Truth expanded to affirm the reality of the human birth and the passion and death of Christ. Guy (2004, p.256) states that ?the rule was a short statement of the central apostolic teachings, a rule against which the faithful could assess other teachings. The rule provided a lens through which to read Scripture and rebut error.? Buas (1980, p.198) states that ?For the Church the rise of the Gnostic heresy was nevertheless a very efficient stimulus to reconsider the truths she possessed, to formulate some of them more clearly and to emphasize them more decidedly.? It is clear that it was the rise and success of Gnosticism, especially Marcionism that encouraged the Church to make a response by developing its dogmas and to establish its own identity from that of Judaism. Gnosticism had the potential to crush Christianity however the response of the Church in developing its ecclesial identity in turn strengthened the Church. The question is raised if Christianity would have developed in the same way had it not been for Gnosticism, it is likely that yes it would have developed in the same way however at a later stage. James Lindsay (1903) states that ?Gnosticism impelled the Church to set forth a true Gnosticism over against that which it considered false, and this while maintaining the positive historical character of Christianity. Thus from the contents of simple and practical Christian belief, a Christian theology eventually resulted. ...read more.