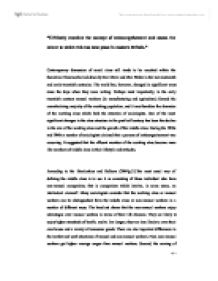 &quot;Critically examine the concept of embourgeisement and assess the extent to which this has take place in modern Britain.&quot;

"Critically examine the concept of embourgeisement and assess the extent to which this has take place in modern Britain." Contemporary discussion of social class still tends to be couched within the theoretical frameworks laid down by Karl Marx and Max Weber in the last nineteenth and early twentieth centuries. The world has, however, changed in significant ways since the days when they were writing. Perhaps most importantly, in the early twentieth century manual workers (in manufacturing and agriculture) formed the overwhelming majority of the working population, and it was therefore the character of the working class which held the attention of sociologists. One of the most significant changes in the class structure in the past half-century has been the decline in the size of the working class and the growth of the middle class. During the 1950s and 1960s a number of sociologists claimed that a process of embourgeoisement was occurring. It suggested that the affluent member of the working class become more like members of middle class in their lifestyle and attitudes. According to the Haralambos and Holborn (2004)p.32,'the most usual way of defining the middle class is to see it as consisting of those individual who have non-manual occupations, that is occupations which involve, in some sense, an intellectual element'. ...read more.

After 1980s, many household had two cars. Jacqueline Klein and Ferdinand Zweig argued that the working classes adopt the lifestyle and the consumption patterns of the middle class and the material affluence possibly with change in political attitudes. The 'embourgeoisement' hypothesis seemed particularly persuasive in the aftermath of the decisive of Labour in the 1959 general election. Conservative Party in 1950s won three elections with increased majority each time. As with the 1979 election, twenty years later, there was a swing against Labour among the working class. "D E Butler and R Rose suggested that Labour might be experiencing particular trouble in hold the affluent working class vote". (O'Dnnell M 1977, p172) they found the number of traditional working class was declined and they should try to widen the basis of political support to include as many middle class people as possible. Despite the strong support for embourgroisement, the evidence on which it was largely impressionistic. John Goldthorpe, David Lockwood and their collaborators put the embourgroisement hypothesis to test in 1960s. They chose luton, then a prosperous area in southeast England with expanding industries. They looked at affluent workers in the car manufacturing industry and found there were still differences between the manual workers and the middle class, which suggested that embourgroisement had not taken place. ...read more.

But the evidence, in fact, shows that the "middle class" is an ideological illusion. In a feature for the Times Press, Karen A. Davis writes that high-tech consultants and managers, who used to earn more than �100,000 a year, discovered after suddenly losing their jobs that their middle-class lifestyle has completely disappeared. I totally agree with Lockwood and Fiona Devine' view that embourgeoisement had not taken place. According to Marxist perspectives of social stratification, there are two major social groups: a ruling class and a subject class. The power of the ruling class comes from its ownership and control of the means of production. The ruling class exploits and oppresses the subject class. The middle class, although they have high wages, they are wage maker. I think that the middle class are still working class, because they do not own the mean of production and I said in last paragraph which the "middle class" is an ideological illusion. The theories of "embourgeoisement"are aimed at concealing the actual proletarianization of the so-called "middle class". The influent workers and "middle class" are becoming heterogeneous, although they have largely different. The process of "embourgeoisement" or proletarianization will make working class more powerful and solidarity. In conclusion, the "embourgeoisement" is taking place rather than taken place. ...read more.