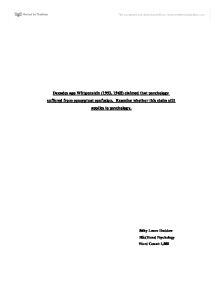 Decades ago Wittgenstein (1953, 1968) claimed that psychology suffered from conceptual confusion. Examine whether this claim still applies to psychology.

Decades ago Wittgenstein (1953, 1968) claimed that psychology suffered from conceptual confusion.  Examine whether this claim still applies to psychology.

Decades ago Wittgenstein (1953, 1968) claimed that psychology suffered from conceptual confusion.  Examine whether this claim still applies to psychology.

Philosophers, over a number of years, have incessantly accused psychologists of having conceptual confusion within their discipline.  Indeed, as Wittgenstein (1968) claimed,

“The confusion and barrenness of psychology is not to be explained by calling it a “young science”….For in psychology there is conceptual confusion…..The existence of the experimental method make us think we have the means of solving the problems which trouble us; though problem and method pass one another by”(Wittgenstein, 1968, p. 232).

Firstly, it is necessary to outline the history of psychology and philosophy.  Originally, psychology was reluctant to associate itself with the unwashed, unscientificarea known as philosophy (Schultz, 1970).  The abstract and rationalistic nature of the latter discipline (Van Kaam, 1958) was not thought to be congruent with a scientific approach which psychology strives to adhere to.  It appears that psychologists were apparently unaware that the very nature of psychology itself was based upon philosophical assumptions (Westland, 1978).  However, psychology has currently moved on from this assumption and recognises the importance of philosophy to the underpinnings of psychology (Hughes & Sharrock, 1997).

In order to appropriately answer the question of conceptual confusion within psychology, and in consideration of the intimate link between psychology and the philosophy of science, it is pertinent to identify and discuss some key concepts from the latter discipline.  The present discussion will primarily focus on two contrasting viewpoints within philosophy; empiricism and social constructionism.  However, at this stage it is necessary to gain an understanding of the role of epistemology and ontology.

Ontology is concerned with identifying what kinds of things, properties and events exist in the world and even, is there such a thing as a real world? (Willig, 2001).  It encompasses two principle viewpoints, realism and relativism.  Extreme realism holds that science mirrors reality, it reflects the world as it really is through a cause and effect relationship between structures and objects.  Thus, realism believes wholeheartedly in the reliability of our knowledge of the world.  This view contrasts considerably with the relativist ontological position which asserts that “reality” is not objective but rather, it is a social construct and is dependent on the diversity of interpretations that can be applied to it (Bem & Looren de Jong, 1997).

Epistemology is a branch of philosophy which investigates the ontological questions of what and how we can know (Willig, 2001).  It is an inquiry into the origins, nature, and extent of human knowledge and aims to distinguish between knowledge and mere belief and establish if in fact anything is certain (Colman, 2001).  Indeed,Kvale (1996, p 278) has described the research methods in psychology as “the way to the goal;” the goal being the attainment of true knowledge of the world.  Within psychology, psychologists need to establish a particular epistemological position.  This involves identification and justification of their goals, with clear objectives and a clear sense of what is possible to find out (Willig, 2001).  The epistemological position adopted is ultimately dependent upon the position of ontology of what there is to know.

As in ontology there are numerous epistemological positions from which researchers can make up their conceptual framework; their paradigm.  However, in addressing the question of conceptual confusion and considering the amount of possible epistemological positions, it seems only appropriate to focus on two positions, that of empiricism and social constructionism.  These two very different viewpoints will adequately demonstrate if there is any conceptual confusion.

The epistemological view of empiricism is strongly associated with the positivist epistemological view.  Positivists believe truth can only be established through objective knowledge, derived purely from observation (Schick, 2000).  Kirk and Miller’s (1986:14) definition of positivism highlights the positivist’s assumption that “the external world itself determines absolutely the one and only correct view that can be taken of it, independent of the process or circumstances of viewing.” This viewpoint of the direct and straightforward relationship between the world and our perception and understanding of it (Willig, 2001) is extended to another viewpoint known as empiricism.  This view holds that our knowledge of the world is based upon the “facts of experience” (Chalmers, 1999) whereby observation through experimentation leads to more complex ideas and generation of theories.

The philosopher Karl Popper was discontented with positivism and empiricisms’ theories of induction and verification.  The problem of induction entails that every time we see a white swan, no matter how many times we observe that swans are white, there is always the possibility that our next observation of a swan will be an exception.  Therefore, the theory of verification, the central element of positivism and empiricism, appears untenable.  Popper aimed to rely upon his hypothetico-deductive method in order to falsify, rather than verify or confirm, a theory’s claims (Willig, 2001).  This involves the testing of theories and the drawing and testing of hypotheses from these theories either by experimentation or observation (Willig, 2001).  By a process of elimination of claims, we can ultimately move further towards the truth.  Popper’s alternative solution to the theory of knowledge comprises the foundations of experimental psychology.

Central to positivism and empiricism is its “correspondence theory of truth”, according to which there is a direct correspondence between things and their representation   (Willig, 2001) and that what exists is what we perceive to exist (Burr, 1995).  This epistemological stance has argued for psychology to be classified as an empirical, natural science concerned with determining unbiased knowledge and truth by means of empirical methods of observation and experimentation (O’Donohue & Kitchener, 1996).  However, this naïve conception of science (realism) embodying a mental mirroring view of the world is widely regarded and proven as entirely untenable and certainly not the only epistemology of psychologists.  Indeed, the post-positivist, Feyerbend highlighted the conservative and dogmatic nature of traditional science, questioning such a dominant paradigm and emphasising the viewpoint that all forms of knowledge and theories are equally valid and competing.  Wittgenstein extended this viewpoint in underlining the contextual nature of knowledge claims (Bem & Looren de Jong, 1997).  Social constructionists have served to radicalise this view into all-out relativism in their claims that human experience, including perception, is determined by historical, cultural and linguistic factors (Willig, 2001) and that scientific knowledge is merely the result of social construction and convention.  Therefore, we should not assume that our ways of understanding are somewhat superior to other ways (Bem & Looren de Jong, 1997).  These views are fundamental to the work of the French philosopher Foucault (Foucault, 1972).

The epistemological social constructionist viewpoint claims that knowledge is dependent on the viewpoint of experience, therefore resulting in the possibility that it can be described in a number of different ways.  Indeed, the fabrication of knowledge is a product, not of objective observation of the world but is constructed through the daily interactions between people in the course of social life and thus providing language with a central role to play (Burr, 1995).  In direct contrast to traditional experimental psychology which infers language to be “a passive vehicle for our thoughts and emotions” (Burr, 1995, p.7), social constructionism construes language to be an essential requirement for “thought as we know it” (Burr, 1995, p. 7).

It is now necessary to identify how the two epistemological positions of empiricism and social constructionism, previously outlined, have influenced psychological work.However, firstly it is crucial to differentiate between the terms, “method” and “methodology,” as defined by Silverman (1993).“Method” describes “a specific research technique” whereas “methodology” refers to “a general approach to studying research topics.”  This distinction is important as the methodological approach is somewhat dependent on the researcher’s epistemological stance.

A researcher who takes an empiricist view of knowledge gathering would answer research questions through the collection of data.  Yet the nature of this data collection, for instance, through observation, questionnaires or interviews is determined by the method chosen and not on the epistemological stance.  It is therefore apparent that “method” and “methodology” are not co-dependent, and yet, not all epistemological and methodological positions are compatible with all methods.  For instance, social constructionism, unlike empiricism, is not compatible with the method of measuring variables in a population.  As in accordance with the viewpoint the measurement is one way of constructing reality.  Rather, a social constructionist may use discourse analysis to gain insight into how an individual constructs a particular event (Willig, 2001).

There appears to be a clear divide between the two epistemological positions of empiricism and social constructionism.  In relation to psychology, these two positions underpin the two main research methods, quantitative and qualitative, respectively, undertaken in psychology.  And yet, a clear divide does not necessarily entail conceptual confusion.  Although it appears that qualitative and quantitative researchers take completely different viewpoints this is not necessarily the case.  In fact, researchers do use quite different epistemological positions, particularly within qualitative research methods and as mentioned before the method does not determine the methodological stance (Willig, 2001).

In addressing the question of conceptual confusion within psychology, it seems pertinent to refer to Reicher’s (2000) view in reference to researchers’ contrasting epistemological approaches within qualitative research,

Considering the strong argumentation to suggest that qualitative research is characterised by significant epistemological diversity (Madill, Jordan & Shirley, 2000; Reicher, 2000), it appears the discipline may be lacking in a coherent conceptual background.

Indeed, it cannot be disputed that psychology suffers from a diverse conceptual background and some even believe the discipline is in need of a framework (Bem & Looren de Jong, 1997), however, are all disciplines derived from a clear conceptual framework?  Certainly the natural sciences, such as physics and chemistry demonstrate significant conceptual clarity as these follow unambiguous experimental methods.  However, not all sciences adhere to strict experimental procedures (Okasha, 2002), such as astronomy and the social sciences.

However, it was earlier defined that if psychology is not conceptually confused, it must show clarity in the conceptual framework from which it’s numerous theories are constructed.”  As Madill et al., (2000) stated,

….qualitative researchers have a responsibility to make their epistemological position clear, conduct their research in a manner consistent with that position, and present their findings in a way that allows them to be evaluated appropriately (Madill et al., 2000, p.145).

It has indeed been established that psychology suffers from a diverse number of conceptual frameworks, and yet, within these frameworks, it is relatively simple to identify the researchers’ epistemological positions (Willig, 2001).  Therefore, it is possible that psychology contains a diverse number of paradigms but within these frameworks, there is conceptual clarity.  Indeed, providing a psychologists’ epistemological stance is easily identifiable then it is reasonable to conclude there is no conceptual confusion.

Chalmers, A. F. (1999).  What is this thing called Science? As cited in Willig, C., (2001).  Introducing qualitative research in psychology: adventures in theory and method.  Buckingham: Open University Press. Pp:3.