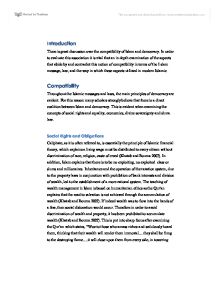 Democracy and Islam - many scholars strongly believe that there is a direct coalition between Islam and democracy. This is evident when examining the concepts of social rights and equality, economics, divine sovereignty and shura law.

Introduction There is great discussion over the compatibility of Islam and democracy. In order to evaluate this association it is vital that an in depth examination of the aspects that abide by and contradict this notion of compatibility in terms of the Islam message, law, and the way in which these aspects utilized in modern Islamic. Compatibility Throughout the Islamic messages and laws, the main principles of democracy are evident. For this reason many scholars strongly believe that there is a direct coalition between Islam and democracy. This is evident when examining the concepts of social rights and equality, economics, divine sovereignty and shura law. Social Rights and Obligations Caliphate, as it is often referred to, is essentially the principle of Islamic financial theory, which explains a living wage must be distributed to every citizen without discrimination of race, religion, caste of creed (Khatab and Bouma 2007). In addition, Islam explains that there is to be no exploiting, no exploited class or slums and millionaires. Inheritance and the operation of the taxation system, due to the property laws in conjunction with prohibition of bank interests and division of wealth, led to the establishment of a more rational system. The teaching of wealth management in Islam is based on humanitarian ethics as the Qur'an explains that the road to salvation is not achieved through the accumulation of wealth (Khatab and Bouma 2007). ...read more.

The Islamic concept of God, who enacted the role of creator and ruler, and lawmaker, has allowed people living after the revelation to govern themselves under the law. Islam essentially forbids anyone to present them self as a new messenger of God (Perry 2003). This therefore disallows individuals from arbitrarily discarding existing laws for self gain. Sayyid Abul A'la Maududi discusses the human legislation in an Islamic state as governing bodies would hold an important role in interpreting, drawing analogies, and inferring other rules from the Shari'ah, along with dealing with issues within the Shari'ah which the supreme law giver has left for individuals to judge and make a decision upon (Perry 2003). Maududi's concept of 'theo-democracy' is basically a governing system which, "the Muslims have been given a limited popular sovereignty under the suzerainty of God" (Perry 2003). However this does not provide the ability to enact any law, which is a heavy part of popular sovereignty. In addition Maududi argues over the existence of limited popular sovereignty (Perry 2003). While this is quite questionable, he continues on to specify that in Islam the correct term is khilafah (vicegerency), with "every believer [being] a Caliph of God in his individual capacity" (Perry 2003). Thus it is governed by the people however, "within the limits prescribed by the Divine Code." ...read more.

consolidate their power while opposition groups appeal to ideological conceptions of Islamic requirements that justify campaigns to unseat those in power (Mayer 1992). Sovereignty Abul Ala Maududi, an Islamic scholar, argues that the Western notion of democracy based on popular sovereignty is at polar opposites from Islam (Maududi 1976). Islamist such as Yusif al-Qaradawi suggest that democracy and popular sovereignty is a secondary concept to the message of God (Abdo 2000). Democratic elections are often impossible to conduct and religious law debases the development of legislature bodies (Khan 2001). In addition a fundamental issue with divine sovereignty is that it does not permit changes to legislature, or Islamic law, as the Qur'an states that no man is permitted to spread the message of God (Khan 2001). Conclusion A compelling argument is clear for both believers of the compatibility and incompatibility of Islam and democracy. On one hand followers of their union site particular statements within Islamic doctrines while on the other hand, those against the pairing notes the impractical nature and the way in which Islam has been used in a negative manner (). Having said that it is clear that democracy and Islam are compatible in the sense that sacred texts such as the Qur'an encourages the basic principles of democracy. If these concepts were to be put into place without the treachery fundamentalist, Islam and democracy can have the potential to coexist within a society. ...read more.