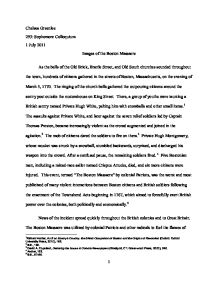 Depictions of the Boston Massacre 1770. Though the newspaper article and the engraving had similar overall intentions in their construction, these two images of the Massacre differ in their relation of the actual course of events and in their visual impre

Chelsea Greenlee 293: Sophomore Colloquium 1 July 2011 Images of the Boston Massacre As the bells of the Old Brick, Brattle Street, and Old South churches sounded throughout the town, hundreds of citizens gathered in the streets of Boston, Massachusetts, on the evening of March 5, 1770. The ringing of the church bells gathered the outpouring citizens around the sentry post outside the customhouse on King Street. There, a group of youths were taunting a British sentry named Private Hugh White, pelting him with snowballs and other small items.1 The assaults against Private White, and later against the seven relief soldiers led by Captain Thomas Preston, became increasingly violent as the crowd augmented and joined in the agitation.2 The mob of citizens dared the soldiers to fire on them.3 Private Hugh Montgomery, whose musket was struck by a snowball, stumbled backwards, surprised, and discharged his weapon into the crowd. After a confused pause, the remaining soldiers fired. 4 Five Bostonian men, including a mixed-race sailor named Crispus Attucks, died, and six more citizens were injured. This event, termed "The Boston Massacre" by colonial Patriots, was the worst and most publicized of many violent interactions between Boston citizens and British soldiers following the enactment of the Townshend Acts beginning in 1767, which aimed to forcefully exert British power over the colonies, both politically and economically.5 News of the incident spread quickly throughout the British colonies and to Great Britain. ...read more.

course of events, the crowd of townspeople outside the customhouse on King Street the night of March 5, 1770, was mob-like and violent. The incident of the shooting was more a case of miscommunication and confused, accidental action than one of malicious intent. Rather than as a violent mob, this section of the article portrays the townspeople almost as petulant children, who, after being pushed and prodded by the British troops, angrily began throwing snowballs. The reaction of the British soldiers was, therefore, both excessively hostile and unwarranted. Captain Preston, who is portrayed in the article as overtly malicious in his attitude towards the crowd, was in actuality attempting to disburse the angry Bostonians, placing himself in front of the loaded British muskets.14 Likewise, the angry order given to the British troops to fire on the crowd did not come from Preston, if it occurred at all, but rather was most likely a misunderstood taunt from a rowdy Bostonian within the mob.15 Both Captain Preston and Private Hugh Montgomery, who was the first to fire into the crowd, were struck with a cudgel before the first shot was fired, despite the article's description, and the blows themselves were not the cause of the shootings.16 A silversmith and ardent Bostonian Patriot, Paul Revere cut an engraving that portrayed the climax of the Boston Massacre, specifically of the shootings outside the customhouse on King Street, which was released on March 26, 1770.1718 The engraving, which was ...read more.