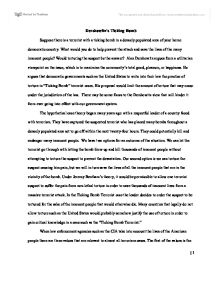 Dershowitz's Ticking Bomb Suppose there is a terrorist with a ticking bomb in a densely populated area of your home democratic country. What would you do to help prevent the attack and save the lives of the many innocent people? Would torturing the suspect be the answer? Alan Dershowitz argues from a utilitarian viewpoint on the issue, which is to maximize the community's total good, pleasure, or happiness. He argues that democratic governments such as the United States to write into their law the practice of torture in "Ticking Bomb" terrorist cases. His proposal would limit the amount of torture that may occur under the jurisdiction of the law. There may be some flaws to the Dershowitz view that will hinder it from ever going into effect with our government system. The hypothetical case theory began many years ago with a respectful leader of a country faced with terrorism. They have captured the suspected terrorist who has placed many bombs throughout a densely populated area set to go off within the next twenty-four hours. They could potentially kill and endanger many innocent people. We have two options for an outcome of the situation. We can let the terrorist go through with letting the bomb blow up and kill thousands of innocent people without attempting to torture the suspect to prevent the devastation. ...read more.

Our third option to solving the dilemma would be to construct a legal framework to encompass torture into our laws of everyday legal practices. There is a final option of not allowing any means of torture no matter what the circumstances are. With no means of torture we could end up in a spot with a case such as ours where we let a preventable act of terrorism occur and let many innocent people die. Alan Dershowitz got involved in this case about terrorism when traveling around the world conducting research and teaching a class in Israel. While there he learned first hand about using torture techniques to obtain useful information about future attacks. After studying terrorism he has concluded that some terrorists are acting for a means of attention, and no matter what policies we have set in place to deter them, we actually reward them with the attention they are seeking. In order to deter terrorism we must learn to punish them within our moral standings. He has made a proposal to the problem. His viewpoint on the issue stems from the third option of encompassing torture within the framework of the law. He creates a proposal for judicially sanctioned torture. ...read more.

Judges do give sentences to people that have been convicted under all processes of law, but in terrorist cases we are using the torture to gain evidence against the suspect. Under the due process laws in the United States Constitution it strictly prohibits unreasonable search and seizure. When we are torturing a suspect to gain information we are searching the subject. Now isn't it unreasonable to cause harm upon a human being just to gain evidence? Alan Dershowitz argues we should sanction under our government laws to torture a terrorist, such as one captured in the "Ticking Bomb" terrorist case, with a warrant received from a judge. Arguing for his proposal of warrant torture, he states that we will minimize cases and prevent terrorists in the future. When protecting our nation's people we try to preserve the three basic values that nearly all terrorist cases encompass. In this terrorist case we have four options to prevent or allow torture with Dershowitz taking his viewpoint from the third option of constructing a legal framework and preventing it from happening outside the realm of our nation's laws. I object to his proposal on the grounds of not only Immanuel Kant's theory of using a person as a mere means to an end, but also because of allowing an equal person to torture another human being just because of a warrant. ?? ?? ?? ?? Reed | 5 | 1 ...read more.