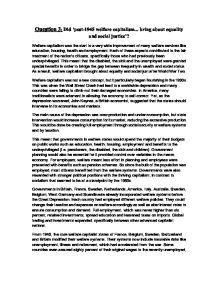 Question 3: Did 'post-1945 welfare capitalism... bring about equality and social justice'? Welfare capitalism was the start to a very wide improvement of many welfare services like education, housing, health and employment. Each of these aspects contributed to the fair treatment of the nation's citizens, specifically those who had previously been underprivileged. This meant that the disabled, the sick and the unemployed were granted special benefits in order to bridge the gap between inequality in wealth and social status. As a result, welfare capitalism brought about equality and social just after World War Two. Welfare capitalism was not a new concept, but it particularly began flourishing in the 1930s. This was when the Wall Street Crash had lead to a worldwide depression and many countries were failing to climb out their damaged economies. In America, many traditionalists were adamant in allowing the economy to self-correct. Yet, as the depression worsened, John Keynes, a British economist, suggested that the states should intervene in its economies and markets. The main cause of the depression was over-production and under-consumption, but state intervention would increase consumption for its market, reducing the excessive production. This would be done be creating full employment through social security or welfare systems and by taxation. ...read more.

Only in the early 1970s did countries like Italy, Germany, Netherlands and Norway decided to thoroughly cover all risks of welfare. Despite this, an incredibly little portion of welfare was given to unemployment benefits. By 1973, unemployment levels accelerated without slowing down and funds were pulled out for pensions and healthcare. As a consequence, taxes and public service fees increased and there was a narrowing of those eligible to receive funds. The majority of people in the core states, particularly the elites, believed those in poverty to be 'undeserving' of the funds. However, welfare capitalism was designed to prevent the elite, who usually have similar political views and are of the same social class, from having too much influence over the economy. This implies that other less fortunate classes were able to obtain similar opportunities to the elite classes. This promotes equality, which is the right to be treated equally and social justice, which entitles the same rights and services as another to all citizens. Therefore, the poor and underprivileged receive opportunities in housing, health and education. The increased access to education raises the chances of employment amongst the poor. Yet, inequality climbed (except in the USA) ...read more.

In certain countries though, welfare capitalism only seemed to increase the inequality in wealth and incomes. However, welfare capitalism has more positive outcomes than disadvantages for multiple reasons. For one it improves healthcare and housing to uplift alleviation and living standards. Education for the underprivileged also gives them the opportunity to become employed and increase their income, which could help raise them into a wealthier social class. Since welfare capitalism specifically looked after the labour force, which comprised of the majority of the population from full employment, it assisted most of the nation. Therefore, in general, welfare capitalism brought about social justice and equality. 1416 words Reference List Armstrong, P., Glyn, A., &Harrison, J. Capitalism since World War II, London, 1984, p. 194-195 Brandes, S. Welfare Capitalism, Chicago, 2004, para 6. Retrieved from http://www.encyclopedia.chicagohistory.org/pages/1332.html Dalton, Economic Systems and Society, Harmondsworth, 1987, p. 144-145, 151, 153 Galbraith, J.K. The New Industrial State, New York, 1967, p. 22 Gough, I. The Political Economy of the Welfare State, London, 1979, p. 42, 44-45, 47 Heyns, A. Social Justice and Human Rights, South Africa, 2007, p.2 Hobsbawn, E. Age of Extremes, London, 1994, p. 282-285 Lorimer, D. 'Welfare' Capitalism And Neo-Liberal Globalisayion, 15 March 2000, para. 14-15. Retrieved from http://www.greenleft.org.au/2000/397/24143 Ponting, C. The Primlico History of the Twentieth Century, London, 1999, p. 144-145, 147-150 ...read more.