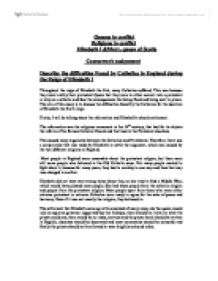 Difficulties faced by catholics during hte reign of Elizabeth the first

Queens in conflict Religions in conflict Elizabeth I &Mary, queen of Scotts Coursework assignment Describe the difficulties Faced by Catholics in England during the Reign of Elizabeth I Throughout the reign of Elizabeth the first, many Catholics suffered. This was because they were told by their protestant Queen that they were to either convert into a protestant or stay as a catholic and face the consequences like being fined and being sent to prison. The aim of this essay is to discuss the difficulties faced by the Catholics for the duration of Elizabeth the first's reign. Firstly, I will be talking about the reformation and Elizabeth's church settlement. The reformation was the religious movement in the 16th century, that had for its objects the reform of the Roman Catholic Church and that lead to the Protestant churches. This caused many arguments between the Catholics and Protestants. Therefore, there was a compromise that was made by Elizabeth to settle the argument, which was caused by the two different religions in England. ...read more.

We then move on to the refusal of some Catholics to conform and the punishment faced by their actions. Papists were not very happy with this settlement; they refused to go to church. They were called recusants. The Tichborne family were people who refused to accept Elizabeth's church settlement. Some of the Tichborne were even killed this showed what could happen to the Catholics if they did not go to the church. Some of the people from the Tichborne family like Nicholas Tichborne was loyal to his queen, but refused to worship anything but the catholic way. Due to this belief, Nicholas Tichborne was fined. Life became hard for most recusants. As well as them being fined $20 each moth, some recusants, like Nicholas Tichborne, lost their land. From that point onwards, recusants were not allowed to do many things like; hold government posts and they were treated with deep suspicion by all of their old friends and neighbours. ...read more.