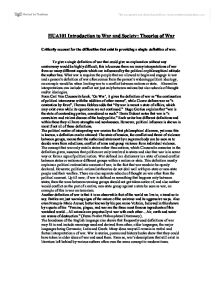 Difficulties of giving a single definition of war

HUA101 Introduction to War and Society: Theories of War Critically account for the difficulties that exist in providing a single definition of war. To give a single definition of war that could give an explanation without any controversy would be highly difficult; this is because there are many interpretations of war from so many different aspects which are influenced by the political or philosophical attitude the author has. What war is requires the people that are allowed to begin and engage in war and a person's definition of war often comes from the person's widening political ideology, an example would be when limiting war to a conflict between nations or state. Alternative interpretations can include conflict not just only between nations but also schools of thought and/or ideologies. Form Carl Von Clausewitz book, 'On War', it gives the definition of war as "the continuation of political intercourse with the addition of other means", while Cicero defines war as "a contention by force", Thomas Hobbes adds that "By war is meant a state of affairs, which may exist even while its operations are not continued." ...read more.

Battles are just warning signs of the nature of the universe and its aggressive ways. Also even Fran�ois-Marie Arouet, better known by his pen name Voltaire, believed in this shown by a quote of his: "Famine, plague, and war are the three most famous ingredients of this wretched world...All animals are perpetually at war with each other...Air, earth and water are arenas of destruction." (From Pocket Philosophical Dictionary). The broadness of the English language also shows that frequently used definitions of war may fit in and include meanings used and derived from other, older languages; the major languages being Germanic, Latin and Greek. Many ideas may still remain in verbal and factual interpretation s of war. War in stories, poems and history books show that they could have taken in older ideas of war and used them. Even so, war's descriptions that still exist in literature left behind by various authors often own the same concept to modern times. Variations only appear when the author's judgement of war is different to another; this would suggest that the Ancient Greek concept of war is not that different from the modern times concept of war. ...read more.

that man may never hide from, to others who believe that while accepting war's inevitability, see that man does have the power to minimize its outcome. The suggestion is that man is not responsible for his own actions and that meaning he is not responsible for war. Opposite of this is a weaker form of looking at the reasoning behind war, certain theorists claim that man is a product of his environment, yet he also possesses the power to change that environment by his actions. Questions raised from this way of thought become quite complex, as they often see that mankind is a subject to unchangeable forces that without delay lead him to wage war. The nature of war is multipart and a broad vision is needed when giving a definition for it. The topic on its own leads to concern and considerations to the philosophy of human nature, as well as to the more usual areas of morals and political philosophy. In many aspects the philosophy of war demands a thorough examination of all aspects of the author's beliefs. [1] Reference to what is war handout. [2] Reference to what is war handout. By Rhys Evenden ...read more.