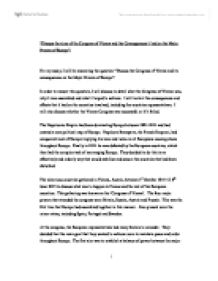 &quot;Discuss the aims of the Congress of Vienna and the Consequences it had on the Major Powers of Europe&quot;.

"Discuss the aims of the Congress of Vienna and the Consequences it had on the Major Powers of Europe". For my essay, I will be answering the question "Discuss the Congress of Vienna and its consequences on the Major Powers of Europe". In order to answer this question, I will discuss in detail what the Congress of Vienna was, why it was assembled and what it hoped to achieve. I will look at the consequences and effects that it had on the countries involved, including the countries representatives. I will also discuss whether the Vienna Congress was successful or if it failed. The Napoleonic Empire had been dominating Europe between 1804-1814 and had created a new political map of Europe. Napoleon Bonaparte, the French Emperor, had conquered most of Europe implying his laws and rules on all Europeans causing chaos throughout Europe. Finally in 1814 he was defeated by the European countries, which then had the complex task of rearranging Europe. They decided to do this in an effectively and orderly way that would stabilise and secure the countries that had been disturbed. The victorious countries gathered in Vienna, Austria, between 1st October 1814 till 9th June 1815 to discuss what was to happen to France and the rest of the European countries. ...read more.

Britain achieved what it wanted at the Congress of Vienna. England did not get mainland territory but got the colonies overseas that they wanted. Britain also kept her French colonies and lands such as st Lucia and cape colony from Holland. Britain was very successful at the congress of Vienna as the agreements allowed Britain's economy to strengthen and by having colonies overseas that produced cheap cotton and sugar, helped to develop British industrialization. Britain also used the colonies for navy purposes and so Britain was affected in a positive way and was left in a strong position at the congress. Prince Metterich, the Austrian Statesman and Diplomat represented Austria. He wanted to stop the expansion of France, Russia and Prussia, for instance stopping Prussia getting Saxony and blocking Russians plan to annex Poland. He did not want revolutions occurring all over Europe, as he was a man who disliked these new changes that were happening throughout Europe. Metternich being a conservative and old fashioned, wanted the monarchy restored such as Louis xv111 of France. Metternich pressed for land in Italy and wanted equilibrium, which means equal power to every country as Austria had no great power, and constantly felt threatened by Russia from the east and France from the west (kileenroos.com). ...read more.

Leaders like Metternich who had ignored the changes that were happening, had not thought about the consequences and how it could affect the European countries in the long term. By suppressing movements like nationalism and liberalism, the congress of Vienna, which had been established to bring peace to Europe, had in fact brought only revolutions and conflicts between the countries. In1914 when Germany started the war the balance of power had been destroyed and proved the end of the Vienna agreements. For this essay the Congress of Vienna and its aims have been explained. What the congress wanted to achieve and how it affected the countries involved have also been looked at. I have discussed in detail what affect it had on Britain and Austria and the aftermath of the congress and how it retained peace throughout Europe. The consequences of the congress and how it failed to achieve what it set out to do, and the problems of it have also been looked at and what happen in the long term. The Congress of Vienna was a successful event, but I feel that the countries involved should have looked in to the changes that were happening at the time. By forcing many countries and nations in to following the old regime had just made the countries fight even harder to change Europe. 1 ...read more.