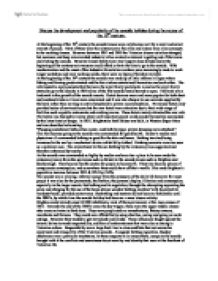 Discuss the development and popularity of the seaside holiday during the course of the 19th century.

Discuss the development and popularity of the seaside holiday during the course of the 19th century. At the beginning of the 19th century the seaside towns were only known well by a small and select amount of people. Most of these were the aristocracy as free time and leisure were alien concepts to the working classes. However between 1837 and 1901 the Victorian leisure activities changed, hot summers and busy overcrowded industrial cities created an interest in getting out of the towns and visiting the seaside. However leisure habits were very largely class divided and at the beginning of the century not everyone could afford or have the time to go to the seaside. With mechanization and the onset of the Industrial Revolution workers were increasingly made to work longer workdays and more working weeks, there were no types of holiday available. At the beginning of the 19th century the seaside was made up of little informal villages where fishing and farming predominated and the few visitors entertained themselves and each other. The rich tended to enjoy pursuits that they saw the royal family participate in and as the royal family started to go to the seaside in 1810 some of the first seaside hotels started to open. ...read more.

The Factory Act of 1833 said that everyone under 18 must have 8-1/2 days holiday a year in addition to Sundays, Christmas Day and Good Friday, and this eventually led to everyone getting the holidays because if the children weren't working the factories could not continue. The half-day was given by law to textile workers form 1850 and the Amalgamated Society of Railway Servants persuaded rail companies in 1897 to give their workers a week's paid holiday after 5 years of service. By the end of the 19th century free time had become a right for all, however not all of it was paid. Paid holidays did not come into force until well in to the next century. The reforming middle classes initially encouraged workers to save for a week by the sea however by the end of the nineteenth century the resorts had been overwhelmed by the culture of the new customers. The working class were the largest class and started going to the seaside for a long weekend or a week. The main reason was because the rail fares were getting cheaper. The working classes being given recognised holiday breaks also helped, this gave them the time to go to the seaside. ...read more.

By the last quarter of the nineteenth century a lot of the seaside resorts had to cope with the constant presence of the working classes. Most of these were young people with wages and no responsibilities and there were also older men with no family commitments or who chose to ignore their commitments. The popular media of the time, from Punch to Ally Sloper's Half Holiday, included jokes about cultural conflict between the classes to their clerks and shop assistants pretending to be gentlemen, adding a new dimension to the comedy of social embarrassment. The bigger resorts, and especially those that catered for the working-class holidaymaker of the late nineteenth century, such as Blackpool and Southend, also offered 'pleasure palaces', as the popular journalist G.R. Sims called them. They combined music hall, variety and dancing with other attractions such as zoos, opera houses, theatres, aquaria, lagoons with Venetian gondolas and gondoliers, pleasure gardens and exhibitions. One of these examples is Blackpool's Tower and Winter Gardens. To conclude the seaside holiday began at the beginning of the 19th century and were mainly enjoyed by royalty and the aristocracy. Later the middle classes joined in and with the introduction of holiday days from work and low train fares towards the end of the 19th century the working classes started to enjoy the seaside holiday. http://www.bbc.co.uk/history/society_culture/society/seaside_04.shtml http://www.courseworkbank.co.uk/coursework/explain_why_seaside_holidays_became_so_popular_the_th_century_1651/ 27/04/04 ...read more.