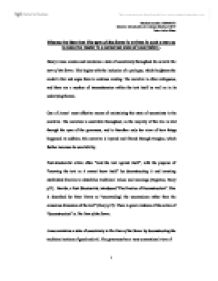 Henry James creates and maintains a state of uncertainty throughout his novella The turn of the Screw. This begins with the inclusion of a prologue, which heightens the reader’s fear and urges them to continue reading. The narrative is often ambiguous, and there are a number of inconsistencies within the text itself as well as in its underlying themes.

One of James’ most effective means of maintaining this state of uncertainty is the narrative. The narration is unreliable throughout, as the majority of the tale is told through the eyes of the governess, and is therefore only her view of how things happened. In addition, this narrative is layered and filtered through Douglas, which further increases its unreliability.

Post-structuralist critics often “read the text against itself”, with the purpose of “knowing the text as it cannot know itself” by deconstructing it and inverting established binaries to destabilise traditional values and meanings (Eagleton, Barry p71).  Derrida, a Post-Structuralist, introduced “The Practice of Deconstruction”. This is described by Peter Barry as “uncover(ing) the unconscious rather than the conscious dimension of the text” (Barry p71). There is great evidence of the notion of “deconstruction” in The Turn of the Screw.

James maintains a state of uncertainty in The Turn of the Screw by deconstructing the traditional notions of good and evil. The governess has a very conventional view of

children and sees them as pure and angelic, and at times almost seems to idolise Miles and Flora. However, James’ deconstruction of these binaries causes the reader to reassess their interpretation of children, Miles in particular, and view them as “evil”. The notion of reinterpreting and deconstructing binary opposites is very common in Post-structuralist writing; Nietzsche famously claimed “There are no facts, only interpretations” (Barry p.63). This concept is particularly evident in James’ presentation of evil in The Turn of the Screw. The reader is left unable to decipher who is in fact “good” and who is “evil” and a sense of moral ambiguity is created.

James’ treatment of power is also interesting as it too has been inverted and deconstructed. There seems to be an absence of power in the novella, male power in particular. The governess’ youth and inexperience suggest that she has been forced into a position of power, in which she is not happy. She does however, never seek help. It is her master that causes this isolation as he chooses to remain absent and escape his position of power. The governess’ response to her experiences at Bly is to take on more responsibility by keeping Miles at home after his exclusion from school, and by screening the children from exposure to the ghosts and their corrupting influence. She views these challenges as “magnificent” opportunities to please the master. This is however, not the case. The governess’ Romantic love for her master is fuelled by her love of Romantic novels, and is never reciprocated. It therefore seems that she is misguided in believing she can adopt a heroic stance, as Flora leaves sick and vowing never to speak to the governess again, and the master whom she loves, never acknowledges her sacrifices. The governess’ position of power and her attempts to guard the children, ultimately become more destructive than the horrors from

which she tries to protect them. Consequently, her attempt to protect and save the children takes the form of a relentless and injurious quest to find out exactly what they know and what has happened previously.

This is closely linked to the idea of fear in James’ novella. The governess’ main fear is of the figures of Quint and Miss Jessel who represent, to her, a loss of power, and a corruption of innocence. However, it is not simply of the appearance of these figures that she is fearful, it is of the unknown and of what they might do. Her fear seems to focus on the potential corruption of the children, whether it be by ghosts or by Quint and Miss Jessel when they were alive. This corruption is, for the governess, a matter of fearful speculation and as a result of this is not explicitly explored in the novella therefore increasing the sense uncertainty.

It seems to be the governess’ knowledge of Gothic novels that feeds her imagination and fear and is ultimately, the cause of her hysteria. Interestingly, it is the governess’ fear and irrationality that scares the children rather than the images of Quint and Miss Jessel to which they seem oblivious and it is Miles who becomes the most powerful character in the novella. This deconstructs the traditional notion that adults have power over children.

“Post-structuralism has a habit of scepticism, … regard(s) any confidence in the scientific method as naïve and derive(s)… pleasure from knowing for certain that we can’t know anything for certain” (Barry p63). This concept is demonstrated in The Turn of the Screw as James keeps the reader in a perpetual state of uncertainty

throughout. It is not only his deconstruction of traditional values that creates this sense of ambiguity; the genre of the entire novella is vague. It has been described by many as a “Ghost Story”, but there have been other interpretations. Although the text does have many of the traditional characteristics of a ghost story, some critics claim it is a psychological tale rather than a supernatural thriller. Such critics attribute the appearance of ghosts to the intellectual and emotional state of the governess’ mind. There has been much criticism of the governess as a hysterical heroine, and many believe that the figures that appear to her are not ghosts, but are illusions or hallucinations. This therefore makes James’ presentation of women somewhat ambiguous. Although the reader is told that the governess is educated, James portrays her as a repressed and naïve woman. Douglas also stereotypes the governess as an emotional and over-protective Victorian woman.

Deconstructionists look for “evidence of gaps, breaks, fissures and discontinuities of all kinds” in a text (Barry p72). There are a number of such gaps or “fault lines” in The Turn of the Screw (Barry p73). For example, the fact that the governess never makes it to church in chapter fourteen may be seen as a deliberate inclusion by James as he questions organised religion.  The ambiguous genre of the novella also seems to challenge traditional Victorian morals as it presents the governess as a hysterical and destructive heroine. The fact that Miles, a child, is the most powerful character in the novella raises a question of class and social position. This links in with the Althusserian concept of “Hegemony”. Barry describes this as “an internalised form of social control which makes certain views seem natural” (Barry p164). From the moment the governess meets the children she idealises them and assumes that because

they are of a higher class than she is, that they are naturally superior. An Althusserian Marxist would claim that this view was imposed on the governess and that it was not her choice to think like this, but simply “the way things are” (Barry p165). These discontinuities in the text as well as James’ reversal if power add to the readers’ sense of uncertainty.

Silence in the novella is also important when considering the readers’ perpetual state of uncertainty. It acts as a predictor of the governess’ visions. She experiences an “intense hush” around her when she first sees Quint in the tower and refers to the “last calls of the birds”. This creates a sense of uncertainty for the reader and the governess herself describes the scene as “stricken with death”. This sense of ominous silence is heightened when the governess meets Quint for a second time, on the stairs. Here she interprets the “dead silence” as a “note of the unnatural”, and claims that it is this that proves Quint is not a living being. Quint’s subsequent disappearance into the silence seems to suggest to the governess that the dead dwell in a realm without sound. This therefore implies to the reader that silence is a mark of the supernatural, and adds to the sense of uncertainty. The idea of finding ideologies from gaps in a text is the main concept of Macherey’s “Significant Silence”.

Many readers have found the Turn of the Screw a challenging novella. The characters often make indirect hints at what they have seen or use rather vague language rather than communicate clearly and directly to the reader. For example, the reader is never explicitly told why Miles is excluded from school, though the word “corruption” is

suggested a number of times. Similarly, the governess speculates on the nature of Quint and Miss Jessel’s relationship, with each other, and with the children, but nothing is ever definitely expressed to the reader. This helps James to maintain a sense of uncertainty and engage the imagination of his readers to produce a more terrifying effect. This is something about which Julia Kristeva, a French Feminist, wrote. Psychoanalytic writing such as Freud’s “Unheimlich” influenced Kristeva’s “The Power of Horror”. Here, Kristeva claims that by crossing boundaries, as James does by including ghosts in his novella, a text can seem to be dangerous and repellent, but may also stimulate and excite the reader. This seems to be the purpose of the prologue to The Turn of the Screw as the reader’s fear is heightened and a sense of uncertainty is established.